Description: A small, slender snake (10.0 to 15.0 inches in length) having smooth scales and a black or dark gray body with a yellow or orange band around the neck. Both subspecies have a bright, yellow belly.

The Northern Ring-necked Snake generally has a complete neck ring and unmarked (or few black dots) belly. The Mississippi Ring-necked Snake has a narrow and often broken up neck ring; and has paired black spots down the center of its belly. Young are similar to adults.

Similar Species: Juvenile Northern and Midland Brown Snakes have conspicuous yellow collars across neck, but they have keeled scales.

Habitat: Ring-necked snakes are habitat generalists occurring in a wide variety of habitats, but tend to be found in moist woodlands. They spend most of their time underground or hidden under logs, rocks, leaf litter, or debris.

Breeding information: Mating occurs in the spring and fall provoked by the females release of pheromones. Females lay 3-7 elongated, white (with yellow on each end) eggs under rotten logs or other moist, covered areas during the summer. Young hatch in 7 to 8 weeks without any parental care.

Status in Tennessee: Fairly common, but Ring-necked snakes are secretive snakes which prefer to remain hidden.

Best places to see in Tennessee: Northern Ring-necked Snakes are primarily found in the mountains of east Tennessee. Under rocks or logs in any moist woodland along the Western Highland Rim would be a good spot for Mississippi Ring-necked Snakes. 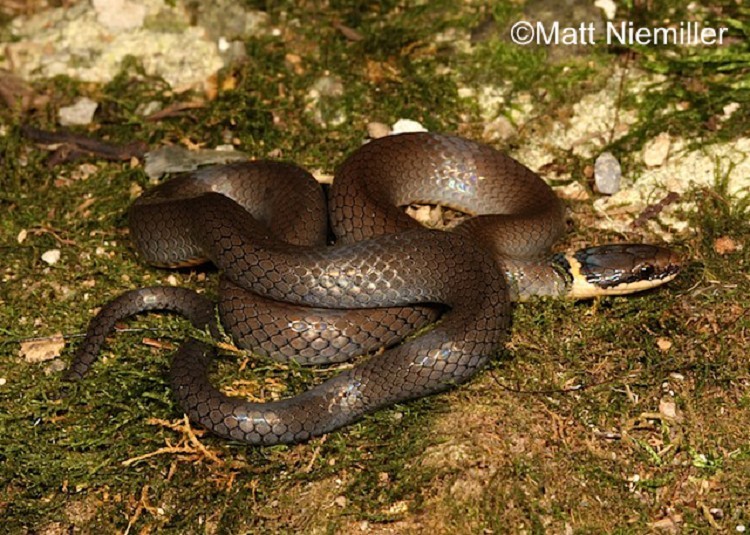