One subspecies, Orange-striped Ribbonsnake (T. p. proximus), occurs in Tennessee and it is found in only 4 counties in the far western part of the state.

Description: A slim, medium-sized snake (20.0 to 30.0 inches in length) with long tail (approximately 1/3 of the total length) and keeled scales.   Three light, longitudinal stripes run the length of the black body.   The mid-dorsal stripe is usually orange, while the side stripes are narrow and yellow and located on the 3rd and 4th scale rows (counting up from the belly scales).

Head is black with large, yellow or orange spots that touch each other; lower jaw lacks black markings.   The unmarked belly is cream-colored or light green.   Young are identical to adults.

Similar Species: Eastern Ribbonsnake has missing or faint spots on the head that do not touch.   Eastern Gartersnake has black markings on lower jaw; side stripes are lower on body (scale rows 2 and 3).

Habitat: These semi-aquatic snakes prefer areas near water such as streams, rivers, wetlands, sloughs, and ponds.

Breeding information: Mating occurs in spring and the young are born alive in late summer or autumn. Females deliver 4-28 young (average 12-13) in a litter. Young mature in 2-3 years.

Status in Tennessee: Uncommon due to its very limited distribution in TN. Orange-striped Ribbonsnakes are afforded no protection in the state. 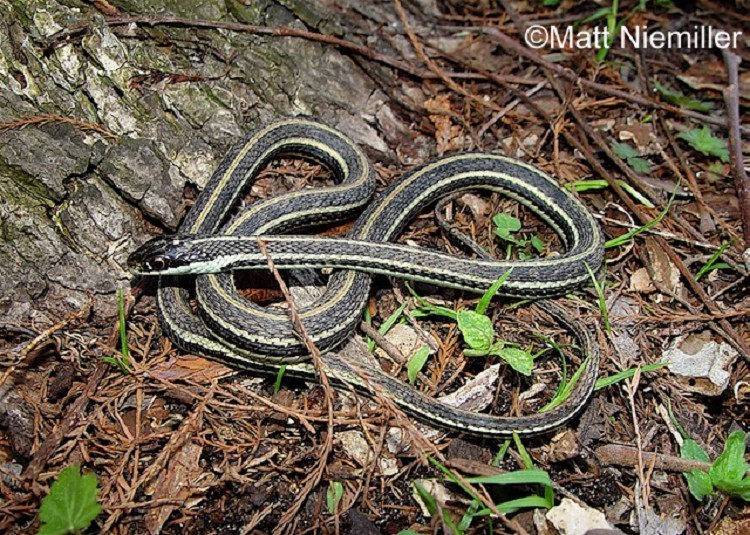