This is one of the most common snakes throughout Tennessee. One subspecies, Eastern Gartersnake (T. s. sirtalis), occurs from border to border.

Description: A medium-size, keel-scaled snake (18.0 to 26.0 inches in length) that is highly variable in coloration and pattern.   Typically 3 light stripes, which can be white, yellow, blue, brown, or green, run along the length of the black, brown, or olive body.   One stripe runs down the center of the snake's back, while the other 2 run down each side on scale rows 2 and 3 (counting up from the belly scales).

Some specimens have faint stripes or lack them altogether.   The area between the stripes on each side usually has a double row of alternating dark spots.   Their tongues are red with a black tip.   Belly is greenish or yellowish with 2 rows of faint black spots that are partially hidden by overlapping belly scales.   Males are smaller than females and have longer tails.   Young are similar in appearance to adults.

Habitat: Lives in a variety of habitats, but most are found near water such as ponds, wetlands, drainage ditches, edges of streams, or damp woods. Also occurs in fields, vacant city lots, parks, cemeteries, and old farms.

Breeding information: Adults mate in the spring soon after emerging from their winter shelters, but may also mate in the fall.   Many males may try to breed with one female.   The males twist and thrash about alongside the female as they try to curl their tail under so that their cloacas meet. Females give live birth to litters ranging from 4 to 85 young during the late summer and early fall.   Larger females can produce as many as 100.

Status in Tennessee: Very common and abundant across the state.   Their success is due partly to their ability to tolerate urban and suburban habitats; however, they are vulnerable to pesticides, water pollution, and over-collection for the pet trade.

Fun Facts:
• Common Gartersnakes are named for the long stripes along their sides, which resemble the stripes from old-fashioned men's garters used to hold up their socks.

Best places to see in Tennessee: Alongside bodies of water or moist areas, or in vacant, grownup lots. 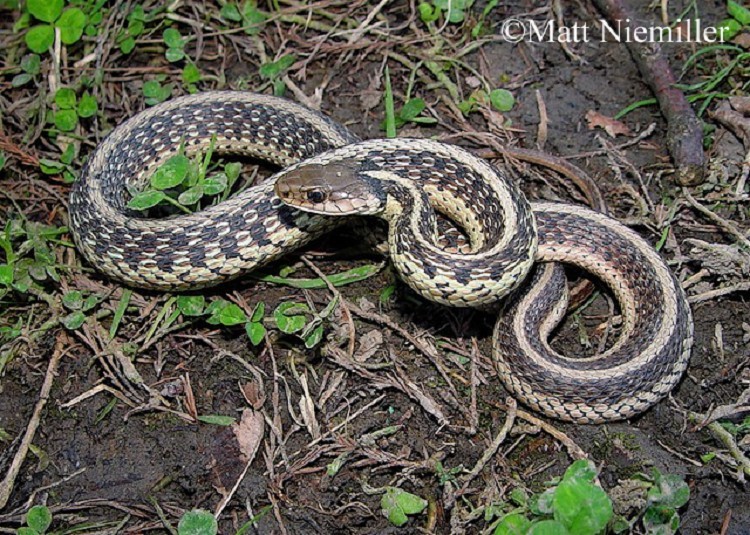