The Pygmy Rattlesnake (also Pigmy) is the smallest, and one of the least known, venomous snakes in Tennessee.   One subspecies, Western Pygmy Rattlesnake (S. m. streckeri), occurs along the western Highland Rim from Stewart County to the southern border.

Description: A small, colorful rattlesnake (15.0 to 20.0 inches in length) with vertical pupil, thin tail, and tiny rattle.   The body color is gray or tan with an orangish-brown mid-dorsal stripe usually present.   There are dark blotches, typically bar-shaped, running along the length of the back with one or two rows of dark spots along each side of the body.

The head has a wide, black stripe which starts at the eye and slopes down to the corner of the mouth; crown of head also has 9 large plates.   Belly is dusky cream-color mottled with dark bars. Scales are keeled.   Young have yellow-tipped tails.

Similar Species: Timber Rattlesnake is much larger and has small scales on crown of head.

Habitat: Found in a variety of habitats, but is usually in close proximity to water. Occurs in flood plains, wetlands, and moist fields; occasionally found in rocky uplands, pine woods, and glades.

Breeding information: Very little reproductive information on the Western Pygmy Rattlesnake. They are presumed to breed in the spring as 3-7 live young are born in late summer.

Status in Tennessee: Western Pygmy Rattlesnake is listed as Threatened by TWRA, and considered rare to very rare and imperiled by Tennessee Department of Environment and Conservation.

Best places to see in Tennessee: Near water at Land Between the Lakes. 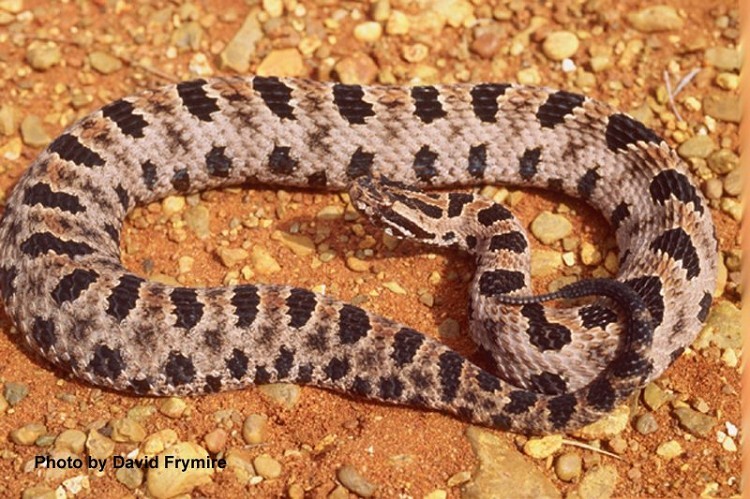