The Timber Rattlesnake is is the largest, and the most dangerous, of the 4 venomous snakes in Tennessee; it occurs across the state.

Description: A large, heavy-bodied snake (36.0 to 60.0 inches in length) with a large, triangular head, vertical pupils, and the characteristic rattle at the end of the tail.   Body coloration is highly variable, but is usually gray with a black tail.

Other colors may include yellow, tan, brown, pink, dark brown, or black.   Black chevron-shaped crossbands occur all down the body.   Typically a rust-colored stripe occurs down the center of the back.

Top of the head is gray, light tan, or yellow with a dark brown line extending from each eye to the angle of the jaw.   Scales are keeled.   There is a large sensory pit on each side of the head between the nostril and eye.

Belly is tan or light gray sprinkled with brown specks. Males are larger than females. Young are lighter in color than adults.

Similar Species: Pygmy Rattlesnake is much smaller with tiny rattle; crown of head has 9 large plates (instead of small scales).

Diet: Mostly small rodents such as mice, rats, chipmunks, and squirrels; occasionally birds, lizards, and other small mammals.   Prey is killed by a venomous bite, in which the venom is injected by fangs located in the snake mouth.

Breeding information: Mating takes place in late summer or early fall after males follow scent trails to the females.   Females give live birth (ovoviviparous) to 5-14 young the following late summer or early fall; females typically produce a litter of young every other year.    Mothers stay with young for 1-2 weeks until they shed, then all disperse to locate food.

Status in Tennessee: Populations are declining across the region as a result of habitat loss and fragmentation, road mortality, and persecution. 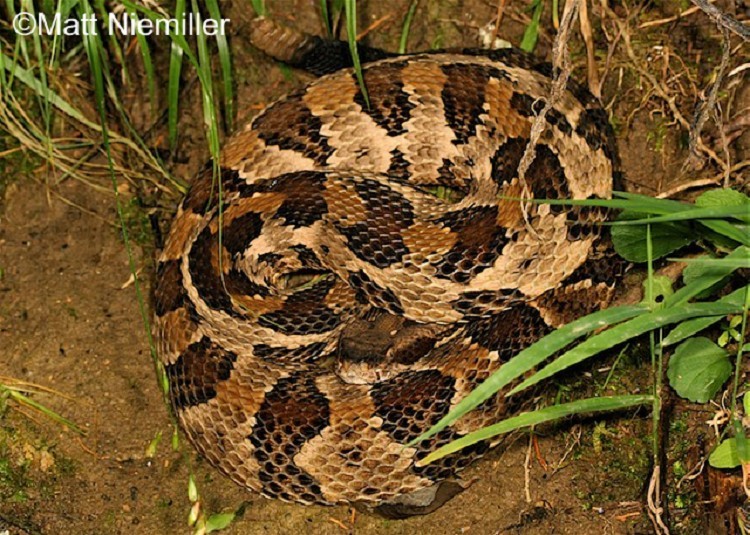