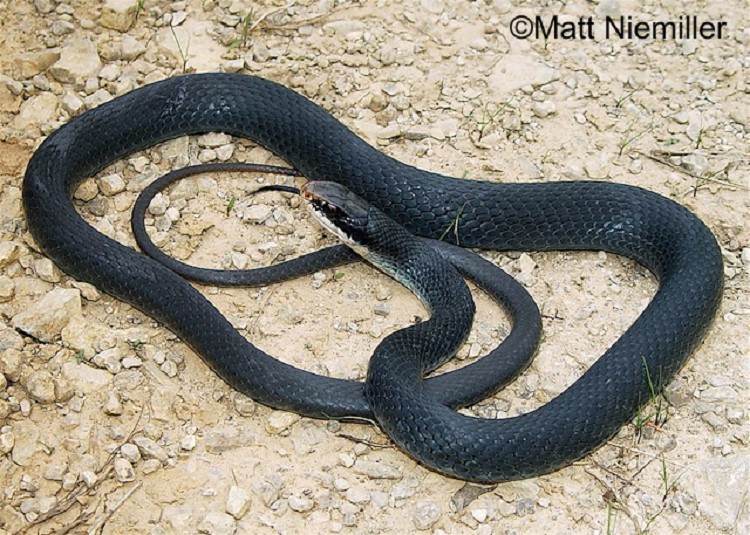 Description: A large, slender, solid black snake (36.0 to 60.0 inches in length) with smooth and shiny scales.

Throat and chin have some white, and eye color (iris) is brown or dark amber.

The belly is dark gray to dark blue in color. Males are slightly larger than females.

Young are lighter in color with dark gray, brown, or reddish-brown pattern on the back.

Northern and Southern Black Racers can only be distinguished by internal anatomical differences.

Similar Species: Gray Ratsnake has keeled scales and the body has a loaf of bread shape; young Gray Ratsnakes have distinct, dark blotches on the tail.

Eastern Coachwhip (black variant) is distinctly lighter or reddish towards the rear of the body.  Melanistic specimens of Eastern Gartersnake have keeled scales.

Habitat: Found in a variety of habitats, but prefers open areas such as old fields, agricultural fields, pastures, and forest edges.

Breeding information: Adults breed in spring. Females deposit 4-36 oblong eggs, which have small salt-like bumps on the shell, in moist underground sites, such as under logs or rocks. Eggs hatch in late summer or fall.

Best places to see in Tennessee: Any open field habitat, especially near edges.