Common Ribbonsnake (T. s. sauritus), the only subspecies in the state, occurs in West Tennessee and in several counties on the Highland Rim in southern and western Middle Tennessee.

Description: A slender, medium-sized snake (18.0 to 26.0 inches in length) with long tail (approximately 1/3 of the total length) and keeled scales. Three light stripes, usually yellow, extend the length of the dark body.   One stripe runs down the center of the back, which may have orangish or greenish tinge, and one runs down each side located on the 3rd and 4thscale rows (counting up from the belly scales).

The dark head may have faint, light spots that do not touch each other; lower jaw lacks black markings.   The unmarked belly is white to yellowish or light green.   Young are identical to adults.

Similar Species:  Western Ribbonsnake has bright spots on the head that touch each other.  Eastern Gartersnake has black markings on lower jaw; side stripes are lower on body (scale rows 2 and 3).

Habitat:   A semi-aquatic snake which rarely travels far from water.   Often found along the grassy or brushy edges of streams, rivers, ponds, lakes, sloughs, or wetlands.

Breeding information: Adults court and mate in the spring.   After breeding the male inserts a copulatory plug to prevent other males from mating with that particular female.   Females give live birth to 3-36 young during summer or fall; average litter size is 12.

Status in Tennessee: Locally common in their preferred habitat and are not protected in the state.

Best places to see in Tennessee: Around the edges of aquatic habitats in West TN or western Highland Rim. 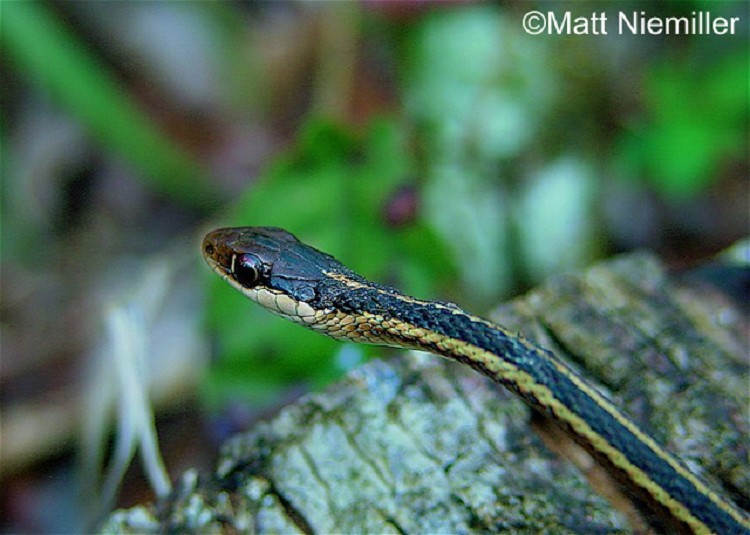