The Northern American River Otter is a graceful, powerful swimmer and are very sociable.  They may be seen in aquatic habitats all across the state.

Description: A medium-sized, elongated mammal with a cylindrical body; a broad, flattened head with a prominent nose pad and whiskers; and a long, heavy tail that is fully furred and tapers from a broad base to a point. The fur is dark brown (appears black when wet), while the undercoat is pale brown or gray. Muzzle and throat are silver to gray in color. The ears are small and the feet are webbed.

Common Muskrat is much smaller and has a vertically flattened tail without fur.

American Beaver is much larger with a very large, horizontally flattened tail.

Nutria has a more slender, rounded tail without much fur.

Habitat:  They primarily use rivers, streams, and lakes, which are frequently bordered by woods. Dens are usually located in banks, beneath rocky ledges, under tree roots, under fallen trees, or in thick vegetation; often they use old lodgings of beavers, muskrats, or woodchucks.

Breeding information:  Males and females remain separate most of the year except when they mate in winter or early spring. Gestation lasts about 2 months, but young may not be born for up to a year due to delayed implantation. Females deliver 1-6 (usually 2-4) blind, fully furred young. They begin to emerge from the den at 3 months and are weaned by 4 months. Males assist with the care after the young leave the den.

Status in Tennessee:  Northern American River Otters are a hunted and trapped species in the state. They may be abundant in some aquatic habitats.

Fun Facts:
•River Otters usually eat the head of their prey first; they do not eat the tail fins of fish.
•They appear to have a real fondness for sliding down steep mud, snow, or ice-covered banks.

Best places to see in Tennessee:  Rivers, streams, and lakes in wooded areas. 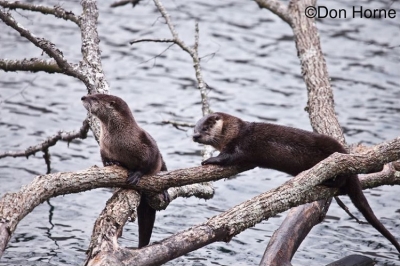