This semi-aquatic rodent, the Coypu, which was originally introduced in Louisiana in the 1930's from South America, has spread northward and occurs in western Tennessee. It is more commonly known as the Nutria or "River Rat."

Description:  A large, robust rodent with a large head, small ears, and a scaly, sparsely-haired, round tail. The fur color is brown above and lighter below. Muzzle color is white and the large incisors are dark orange. The front legs are small and the hind feet are webbed (except between 4th and 5th toes).

Habitat:  Coypu can be found in freshwater streams, rivers, ponds, and marshes.

Diet: They are primarily herbivores, eating aquatic and terrestrial vegetation. Cattails, reeds, and sedges are favorite foods; they will also eat some grains.

Breeding information:  Breeding occurs throughout most of the year. Females can raise up to 2 litters per year. Courtship involves much chasing, fighting, and biting. Females have a gestation period of about 130 days after which 1-11 (usually 4-6) young are born. The well-developed young are born fully haired and with eyes open.

Status in Tennessee:  Coypu need no protection as they are becoming more abundant and their range is spreading eastward. They can cause damage to banks and levees, and have been known to trample crops and gardens.

Fun Facts:
•Coypu sometimes dips its food into water before eating.
•Their furs have made them a very important part of the trapping industry. 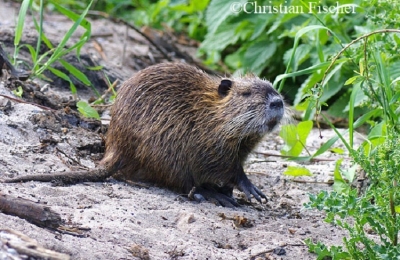