Description:  A very large, stout, dark brown rodent with a lighter underside and a large horizontally flattened tail.  The tail is scaly, black, and paddle-shaped.  The hind feet of beavers are large and webbed; and they have small eyes and ears. Incisors are distinctly large and chestnut-colored.

Similar Species:
• Common Muskrat and Nutria are much smaller with slender tails.
• North American River Otter is smaller and tail is thick at base narrowing to a point.

Habitat:  These highly aquatic mammals live in streams, rivers, wetlands, ponds, and small lakes.   Beavers are well known for their skills in building dams made of tree limbs, branches, mud, stones, and other debris in streams and rivers to slow down the water.   Lodges, which provide a living space, are built into the dam or in shallow water nearby, although sometimes they will excavate a den in a bank instead.

Breeding information:  Male and females are thought to be paired for life. They begin mating in January and February. The gestation period is around 3 months and young are born fully furred, with eyes open, and able to swim right away. Females only produce one litter a year bearing 1-8 (average 3-4) young. Young beaver (kits) are weaned within 2 weeks, begin to come out of the den around 1 month, and will stay with parents up to 2 years.

Status in Tennessee:  Beavers are a common mammal in aquatic habitats and are abundant in many areas across the state. They are not a conservation concern, although in previous centuries their numbers dropped significantly due to unregulated trapping. Populations have rebounded and they are currently hunted and trapped for their meat and fur, or because they are creating flooding problems.

Fun Facts:
• Beavers forcefully slap the water with their tail to warn intruders or other beavers.
• They are mostly nocturnal and can best be viewed in the evenings. 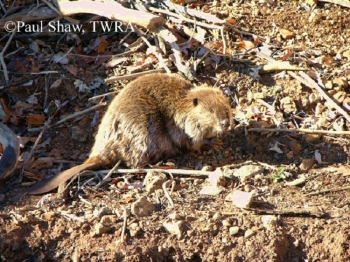