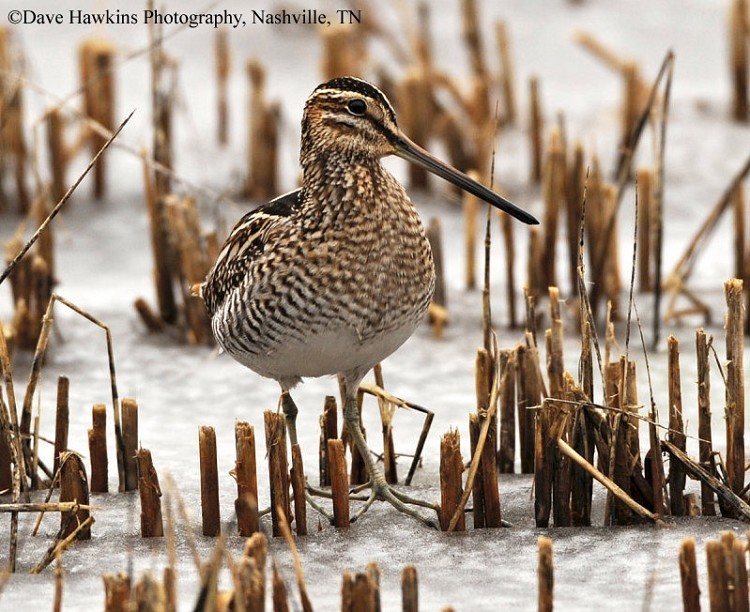 Formerly known as the Common Snipe, snipe that breed in North America are now considered a separate species called the Wilson's Snipe.  This small, chunky, long-billed shorebird spends the non-breeding season in Tennessee.

It can be found alone or in small groups across the state probing in mud and wet meadows for small invertebrates.  However, its camouflage coloration is so good that it is often overlooked until flushed when it rapidly flies away in a zigzag pattern, uttering its raspy scaipe call.

The Wilson's Snipe breeds across northern North America, and winters in the lower half of the U.S. south to northern South America.

Description: This medium-sized shorebird, has a short neck, short legs, short tail, and a very long straight bill. It is colored cryptically with mottled brown and black, and prominent light tan stripes on both its head and back.  Males, females, and juveniles look similar, and there is no seasonal variation in plumage.

Voice: The flight call is a low, rasping scaipe or kesh.

Habitat: Forages on exposed mudflats, in shallow marshes and meadows, and along creeks and the edges of lakes and ponds.

Nesting and reproduction: Wilson's Snipe has not been documented nesting in Tennessee.

Status in Tennessee: Wilson's Snipe is a fairly common migrant and winter resident across Tennessee, present from mid-August through late May. This is a game species in Tennessee requiring a TN Migratory Bird Permit.  The hunting season is usually in late November.

Best places to see in Tennessee: Wilson's Snipe may be found across the state in appropriate habitat from Reelfoot Lake in the northwest to Hiwassee WMA in the southeastern part of the state.