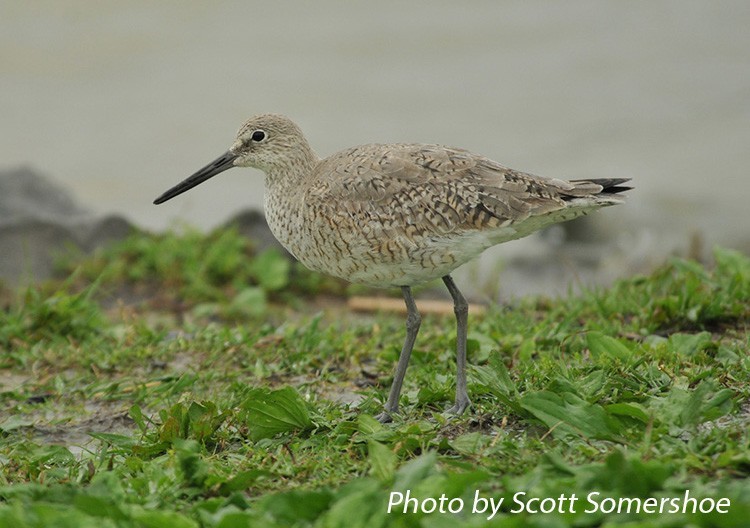 When this large, drab shorebird opens its wings, a remarkably bold black-and-white pattern is revealed. It is the Western subspecies of the Willet that is a rare, but regular spring and fall migrant in Tennessee.  It is usually found singly or in small numbers in the fall, but groups of over 100 birds have been recorded in the spring.

This bird breeds inland, primarily in freshwater habitats of the western states and provinces, and winters on both coasts. The Eastern subspecies is about 10% smaller, restricted to the east coast, and may prove distinct enough to be split into its own species.

Description: The Western Willet is 10% larger and has a bill and legs that are 15% longer than the Eastern Willet. The body is overall grayish with a bold black-and-white wing pattern seen in flight. The legs are long and usually blue-gray, and the bill is long, straight, and black with a grayish or brownish base.

Voice: The territorial call is a ringing pill-will-willet. When flushed they make a variety of calls including a monotonous wik wik wik.

Nesting and reproduction: The Willet has never been documented nesting in Tennessee.

Status in Tennessee: Only the Western subspecies of the Willet has been recorded in Tennessee. It is a rare but regular migrant found singly or in small numbers in fall and occasionally in large numbers in spring.

Spring migration is from early April through mid-May; fall migration is more prolonged lasting from late June into late September. Willets are more often found during bad weather and after heavy storms that force them to stop temporarily.