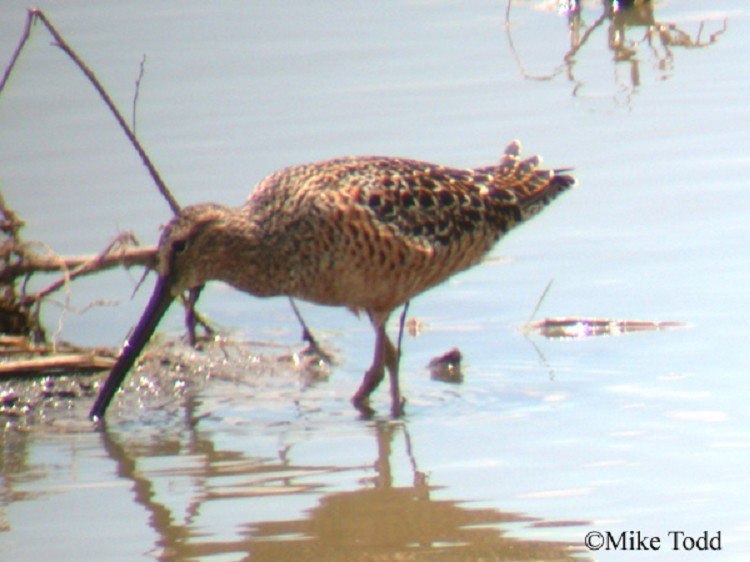 The Long-billed and Short-billed Dowitcher can both be found in Tennessee, especially during fall migration, and the Long-billed is the one less likely to be encountered.  These shorebirds are both medium to large-sized with very long bills.

The Short-billed's bill is only short in comparison to the Long-billed Dowitcher's bill, and the bill of the female Short-billed is the same length of that of the male Long-billed.  Their rapid probing in the mud while foraging is often described as like a "sewing-machine."

Both will forage day or night, and readily swim. Range, habitat, and vocalizations should all be used to help distinguish between these two species. The Long-billed Dowitcher breeds in the high Arctic from eastern Siberia across Canada, and winters along both coasts of the United States and inland through Mexico and northern Central America.

Description: This medium to large-sized shorebird has a bill that is twice as long as its head, and moderately long, pale legs.  In flight, it shows a distinctive white blaze up its back, as does the Short-billed Dowitcher.

In spring breeding plumage (April-August) it is reddish below and mottled-brown above; in fall (September-April) it is gray above and pale below. Immature birds (July-November) have a buffy chest and flanks, but are more plain than breeding adults.

A key to distinguishing immature Long-billeds from Short-billeds is that the tertials of the Long-billeds are plain grayish with narrow rusty edges, instead of patterned. The female has a longer bill than the male.

Nesting and reproduction: Neither Long-billed nor Short-billed Dowitchers have ever nested in Tennessee.

Status in Tennessee: The Long-billed Dowitcher is an irregular, rare migrant across in Tennessee. It is more likely encountered in fall than spring, and expected in the state from late April to mid-May, and from mid-July to early November.