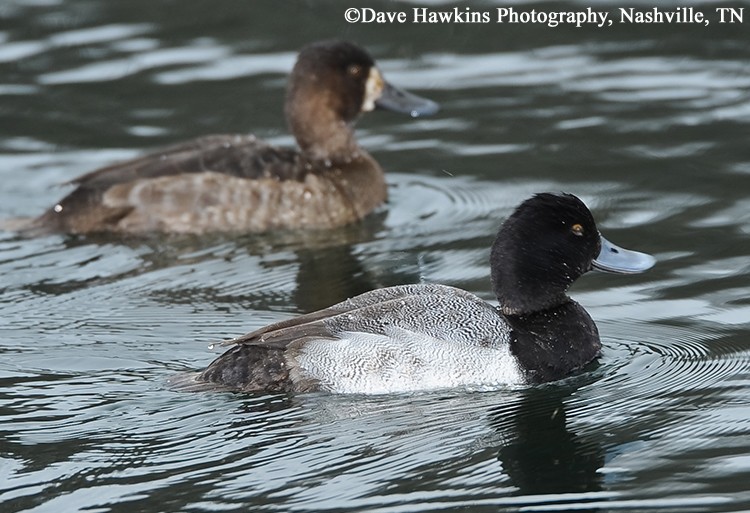 The Lesser Scaup is s one of the most abundant and widespread North American ducks. It forages by diving underwater to capture mollusks, crustaceans, and aquatic insects. The Lesser Scaup is found in Tennessee during the winter, and especially during migration, when they can form large rafts* with other species of diving duck.

Lesser Scaup breed in wetlands and lakes in the boreal forest from central Alaska to central Canada, southward to the northern United States. Individuals winter on ice-free freshwater bays, lakes and wetlands across the United States, southward to northern South America and in the Caribbean.

Description: The Lesser Scaup has a slight bump or peak on the back of the head. The male’s head looks dark but has a purplish iridescence in good light. The neck, chest and hind-end are black, the back is gray, and the sides are white.

The female is overall brown, with a white band at the base of the bill. In flight, white extends less than halfway out on the wing.

Habitat: In Tennessee, they are found on ponds, lakes and rivers.

Status in Tennessee: The Lesser Scaup is a fairly common winter resident, with greater numbers in the state during spring and fall migration. It arrives in late October and most migrants and wintering birds depart by early May.

* A raft is the name given to a large number of ducks on the water.