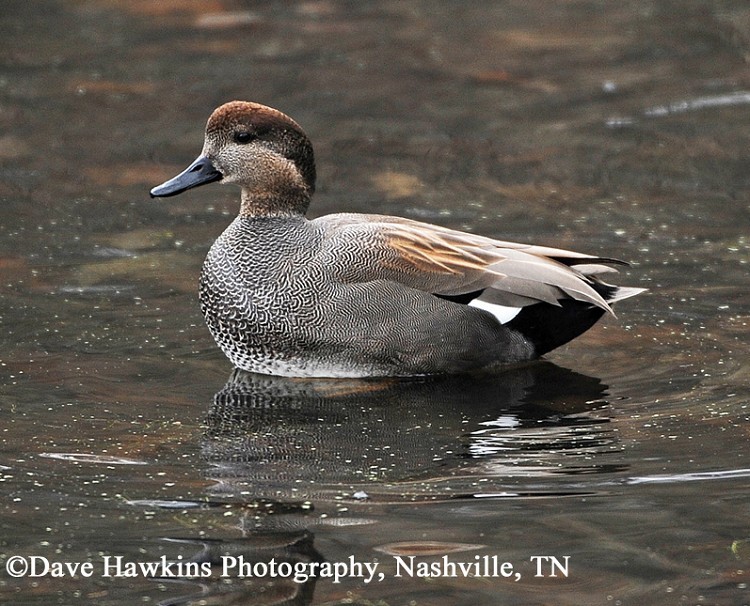 Gadwall Ducks are commonly found in Tennessee during the non-breeding season in mixed flocks with other waterfowl.  These birds are dabbling ducks, which means they forage by tipping their hind end up in the air to reach aquatic vegetation, seeds and snails below the surface.

They breed from southeastern Alaska to the Great Lakes, south to Texas and California.  In winter, they migrate to the southern United States and coastal Mexico, with the largest concentrations along the Gulf Coasts of Louisiana and Texas.

In Tennessee, they generally arrive by mid-September and depart by mid-April.

Description: The male is overall gray, with a paler head, and a black hind-end.

The female is mottled brown. In flight, both male and female have a white belly, and a small square white patch in the wing.

Voice: The female has a quack similar to a Mallard; the most common vocalization of the male is a nasal burp.

Habitat: In Tennessee they are found on ponds, lakes, rivers and forested wetlands.

Nesting and reproduction: The Gadwall has never been known to nest in Tennessee.

Status in Tennessee: Gadwall are fairly common migrants and winter residents across the state, but are more common in Middle and West Tennessee. They arrive by mid-September and depart by mid-April.

Best places to see in Tennessee: Ponds, lakes and forested wetlands across the state, including most Wildlife Management Refuges.