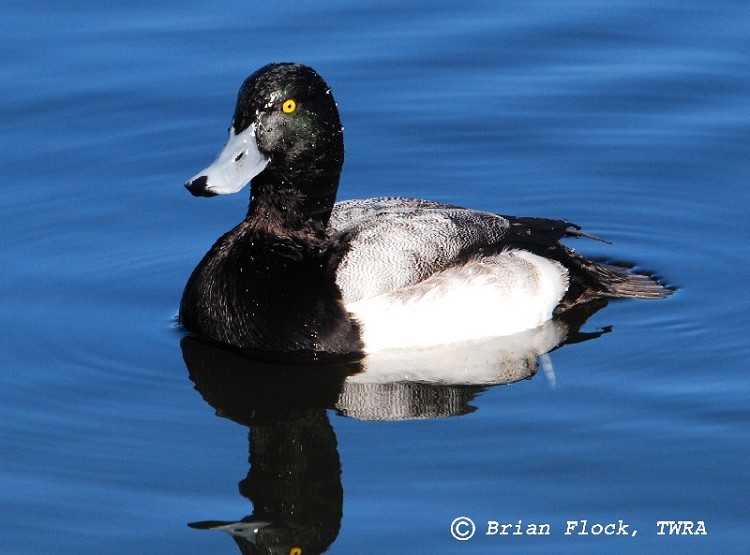 The Greater Scaup is a medium sized diving duck is one of the few ducks with a circumpolar distribution and is found across Eurasia as well as North America. It is more associated with salt water than the more abundant Lesser Scaup.

The breeding range in North America is primarily in coastal tundra in western Alaska and around Hudson Bay. The majority of the population spends the winter along the Atlantic and Pacific coasts, but it is also found on large unfrozen lakes from the Great Lakes south.

In Tennessee, the Greater Scaup is an uncommon migrant and winter resident in the western part of the state and rare elsewhere.

Description: The Greater Scaup has a rounded head. The male’s head looks dark but has a greenish iridescence in good light. The neck, chest and hind-end are black, the back is gray, and the sides are white.

The female is overall brown, with a white band at the base of the bill. In flight, white extends more than halfway out on the wing.

Habitat: In Tennessee, found on rivers and lakes.

Status in Tennessee: The Greater Scaup is an uncommon migrant and winter resident in East Tennessee and rare in the rest of the state. They arrive by late November and depart by mid-April.