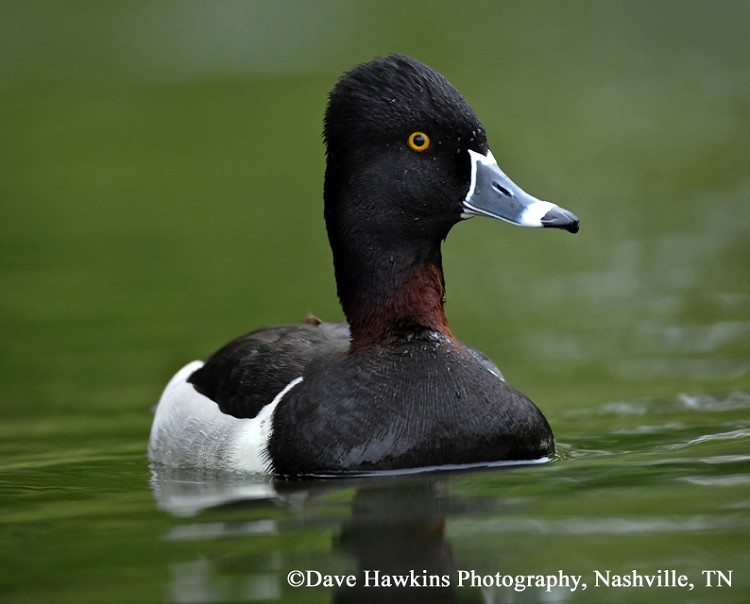 This duck breeds across central Canada reaching the northern United States. It spends the winter across the southern United States, along both coasts, and southward through Mexico, Central America, and the Caribbean. During the winter they can form large rafts* and are often found in association with Lesser Scaup.

This diving duck is found in Tennessee during the non-breeding season and more likely to be seen on small ponds than other diving ducks.

Description: This medium-sized diving duck has a distinctive white ring on the bluish, black-tipped bill. A short crest gives the head a peaked look. The male has a black head, chest, back and rear end. The sides are gray and there is a vertical white stripe on the shoulder.

The female is overall brown with a white eye-ring that has a white line extending back from the eye.

Habitat: In Tennessee, Ring-necked Ducks are found on lakes, ponds, flooded grain fields and forested wetlands. They are found in more shallow portions of lakes than other diving ducks.

Status in Tennessee: The Ring-necked Duck is a fairly common migrant and winter resident in the state, with greater numbers wintering in West and Middle Tennessee. They arrive in early October and most depart by late April.

Best places to see in Tennessee: Cross Creeks NWR, and other state and federal waterfowl refuges in Tennessee.

*A raft is the name given to a large number of ducks on the water.