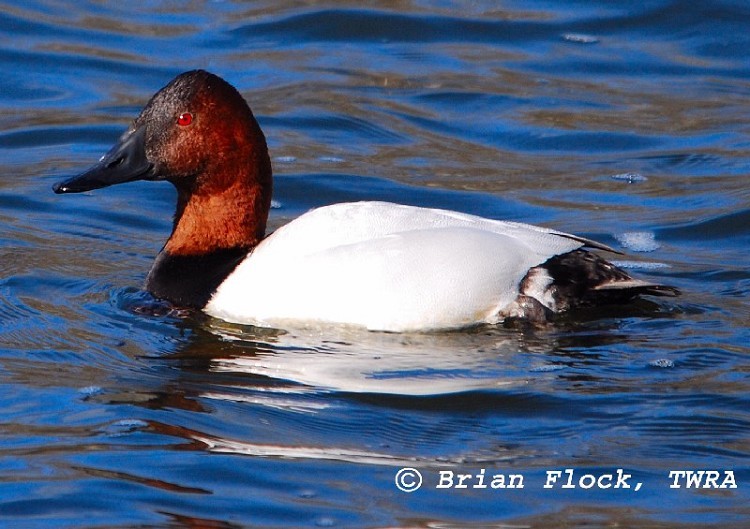 The Canvasback  Duck is an elegant and distinctive diving duck with a long sloping forehead and long, black bill. Unlike many of other ducks, the Canvasback occurs exclusively in North America, but is one of the least abundant ducks on the continent.

This species breeds from central Alaska to central Canada southward to Nevada and Minnesota. Canvasback winter in the southern United States and along both coasts. Populations have fluctuated widely but overall appear to be stable.

The Canvasback occurs in Tennessee during the non-breeding season from late October to late March, in areas of ice-free deep water.

Description: The head shape of the Canvasback is unique with its long sloping forehead and bill. The male has a chestnut-colored head, a black chest and rear end, and a pale gray body.

The female has a pale brown head, and pale grayish-brown body.

Habitat: In Tennessee, they are found in deeper lakes, ponds and rivers.

Status in Tennessee: The Canvasback is an uncommon migrant and winter resident in the state, but they may be locally common where suitable habitat and food is available. They arrive in late October and most depart by late March.

Best places to see in Tennessee: Pace Point/Britton Ford area of Tennessee NWR, and other state and federal waterfowl refuges with deep water.