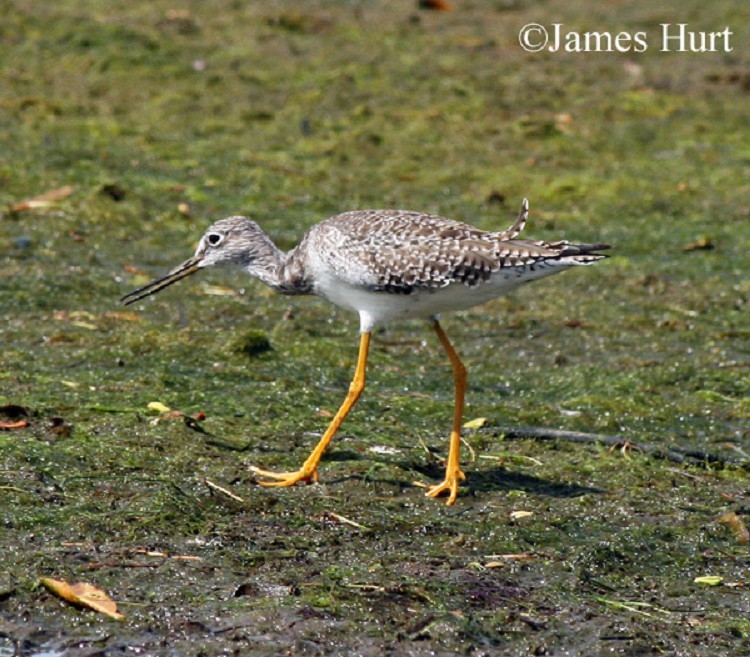 Because the Greater Yellowlegs breeds in the mosquito-infested bogs and marshes of the boreal forest of Canada and Alaska, much is not known about its breeding biology.

This large shorebird passes through Tennessee each spring and fall on its journey between the breeding grounds and its wintering grounds in the southern U.S., and Central and South America.

The Greater Yellowlegs usually forages on mudflats and at the edges of lakes and ponds alone but may be found in small flocks during migration.

Description: Tall, active shorebird with bright yellow legs, thin neck, long dark bill, an upright stance, and square white rump patch. The body is grey-brown on top and white underneath; the neck and breast are streaked with dark brown.

In fall and winter, it is grayer overall.  Bill length is much longer than the length of the head, which is important in distinguishing this species from the Lesser Yellowlegs (see below).

The distinctive call can also be helpful in identification.

Voice: Flight call is a loud deew deew deew or klee klee klee call given in three or four notes.

Nesting and reproduction: Greater Yellowlegs have not been documented nesting in Tennessee.

Status in Tennessee: Uncommon, but regular migrant statewide. In spring, found from late February through May with the first southbound migrants found in early July and late migrants found into November.