The Copperhead is one of 4 venomous snakes in Tennessee; this pit viper occurs across the entire state.

Description: A medium-sized, heavy-bodied snake (24.0 to 36.0 inches in length) with a large, triangular-shaped coppery-red head and vertical pupils.   Distinctive dark brown “hourglass” crossbands are wide on sides and narrow at the center of the back.   Body color is variable, but is usually light brown or gray.

Belly is usually gray to pink with darker blotches. Facial pits occur on each side of head between eye and nostril and a little below.   Scales are keeled. Southern Copperheads are paler and pinker than the Northern subspecies.   Males are larger than females.   Young resemble adults, but have bright yellow tails.

Similar Species:  Milksnakes have wide dark blotches at center of back.  Juvenile Cottonmouths have a broad, dark band through the eye and body color is mostly dark brown.  Eastern Hog-nosed Snake has up-turned snout, and hisses and flattens head when approached.

Habitat: Generally prefers forested habitat and avoids open areas such as pastures and agricultural fields.   Often found on rocky, wooded hillsides with abundant logs, leaf litter, or rocks for cover.   Copperheads can also be found in urban and suburban environments, as well as near wetland and stream edges.

Breeding information: Adults court and mate in spring and fall.   Males locate females by scent and often fight other males in a vertical combat, in which front third of their body becomes airborne and entangled.   Copperheads, like other vipers, produce relatively few young.   Females give live birth to 1-21 (average 7) young in late summer or early fall.

Status in Tennessee: Locally abundant except for central and western Tennessee.   Populations are vulnerable to being killed by humans and road mortality.

Best places to see in Tennessee: Rocky, forested hillsides of the western Highland Rim or mountains in eastern Tennessee. 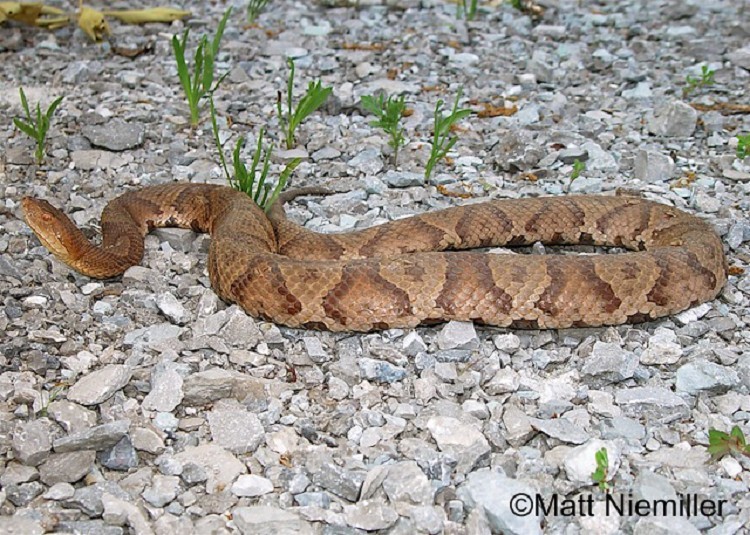