Thr Star Nosed Mole is one of the most uniquely specialized noses in the animal kingdom. It is also the most aquatic Tennessee mole and only occurs in the eastern part of the state.

Description:
A small, stout, streamlined mammal with 22 pink, fleshy tentacles radiating from the nose in a star-like pattern. The soft, short fur is brownish-black or black and lighter on the belly. They have concealed ears, tiny eyes, and a long, scaly tail with coarse hairs. The heavy-built forelimbs support enlarged, broad feet and large claws that point outward to aid in digging underground tunnels.

Similar Species:
•Hairy-tailed Mole has short, densely furred tail.
•Eastern Mole does not have fleshy projections on the snout.

Habitat:
Star-nosed Moles are found in a variety of habitats with moist soil, including woods, bogs, marshes, and fields. Frequently adjacent to water and in higher elevations.

Diet:
Earthworms and aquatic insects are the primary foods, but it also eats snails, crayfish, small amphibians, and fish.

Breeding information:
Mating begins in mid-March to April with young being born in late April through mid-June. Females produce one litter of offspring per year like other moles. Litters ranging in size from 2 to 7 (average 5) young are born after a 45 day gestation period. The pale pink, blind, and hairless newborns grow at a rapid rate. Eyes, ears, and the tentacles of the star become functional at 2 weeks and the young are ready for weaning after 3 weeks.

Status in Tennessee:
Star-nosed Moles are uncommon, and Deemed in Need of Management by both TWRA and Tennessee Department or Environment and Conservation.

•Star-nosed Moles are excellent swimmers and have even been observed swimming under ice.
•Each one of the 22 tentacle-like projections contain numerous highly sensitive organs, called Eimer's organs, rich with nerves and blood vessels, which help to identify potential food items.

Best places to see in Tennessee:
Moist soils next to a water source in the Appalachian Mountains. 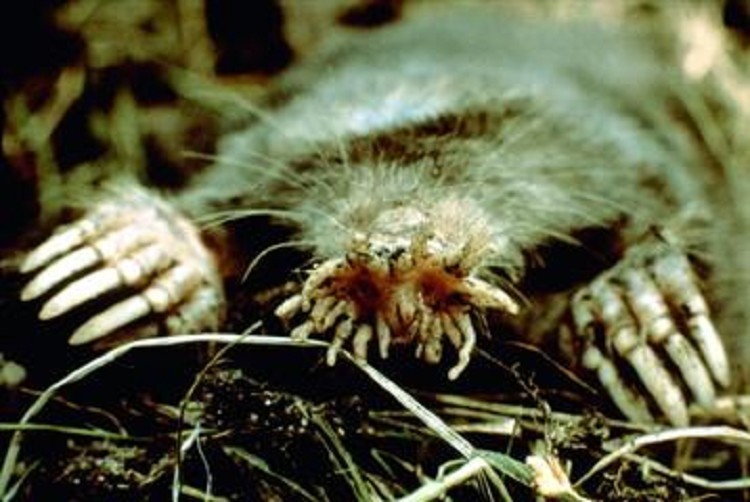