Of the 3 moles that are found in the state, the Hairy-tailed mole is the smallest. It occurs in the mountains of eastern and middle Tennessee.

Description:
A small, stout, streamlined mammal with concealed ears, tiny eyes, and a fleshy, movable snout.   The velvety fur is dark gray or nearly black above and slightly lighter beneath.   As the name suggests, its tail is densely furred and short.   The broad front feet are enlarged, have large claws, and point outward to aid in digging underground tunnels.

Similar Species:
•Eastern Mole has a longer tail, which only has scattered hairs.
•Star-nosed Mole has pink, fleshy appendages on the nose.

Diet:
Earthworms are a principle food; also grubs, beetles, ants, and other invertebrates.

Breeding information:
Mating season begins in late winter or early spring. Females build a nest chamber, made of dried leaves and grass, below the surface of the ground.  Litters of 2-6 (average 4-5) young are born after a 4-6 week pregnancy.   Newborn moles are blind and nearly hairless. Young are weaned after a month of rapid growth.   Moles only produce 1 litter per year due to their low predation rate.

Status in Tennessee:
Hairy-tailed Moles are uncommon in the state, and therefore Deemed in Need of Management by both TWRA and Tennessee Department or Environment and Conservation.

Fun Facts:
•The Hairy-tailed Mole, like other moles, tunnel deeper in the ground during the winter where it's better insulated from cold weather.
•Moles are the most subterranean of all mammals.

Best places to see in Tennessee:
Forests with loose soil in the Appalachian Mountains. 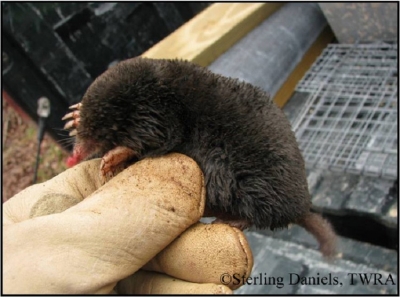