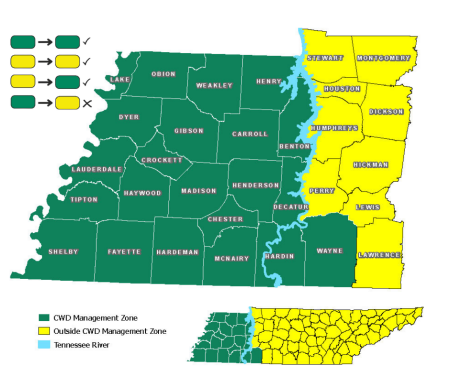 Carcass transport restrictions, along with wildlife feeding and mineral placement restrictions, are immediately triggered when a county becomes CWD positive or CWD high-risk.

The status of CWD affected counties:

These parts have a low risk of spreading CWD.

These parts have high risk of spreading CWD.

If you harvest a deer, elk, or moose from anywhere outside the state, it must be properly processed before bringing it back into the state of Tennessee.

No person may import, transport, or possess in Tennessee a cervid carcass or carcass part from anywhere outside state except as provided herein:

Deer carcass and carcass parts from infected deer pose a significant threat to preventing the spread of CWD. If not managed appropriately, carcasses of CWD-infected deer can pass the infectious material (prions) into the environment, which can then infect other deer. It is not known to affect humans, pets, or livestock.

As such, TWRA recommends the following best practices for disposal of unused deer parts, including gut material from field dressing a deer: