Description: A medium-sized, aquatic turtle (adults average 5.0 to 8.0 inches in length, max 11.5+ inches but bigger ones have been reported) with a carapace (upper shell) ranging from dark green to brown to almost black with yellowish markings.

Head, neck, and limbs are striped yellow over a green or brownish skin. Lower jaw is rounded rather than flattened.   Plastron (lower shell) is yellow with each plate usually having a dark spot.

Habitat: Prefers still waters such as ponds and lakes, but will also use slow-moving rivers, sloughs, and oxbow lakes. Aquatic vegetation, muddy bottoms, and abundant basking sites are important too.

Breeding information: Adults begin courting and mating in the water during spring, possibly continuing into fall. Females leave the water to find a suitable nesting site to lay 4-22 oval, white eggs. Eggs hatch in late summer or fall, but the young remain in the nest through the winter and dig out the next spring.

Status in Tennessee: Common across the state, especially Red-eared Sliders. Slider populations have declined recently due to collection for the pet trade and food trade.

Best places to see in Tennessee: Basking on logs or fallen trees around the edges of lakes or ponds. 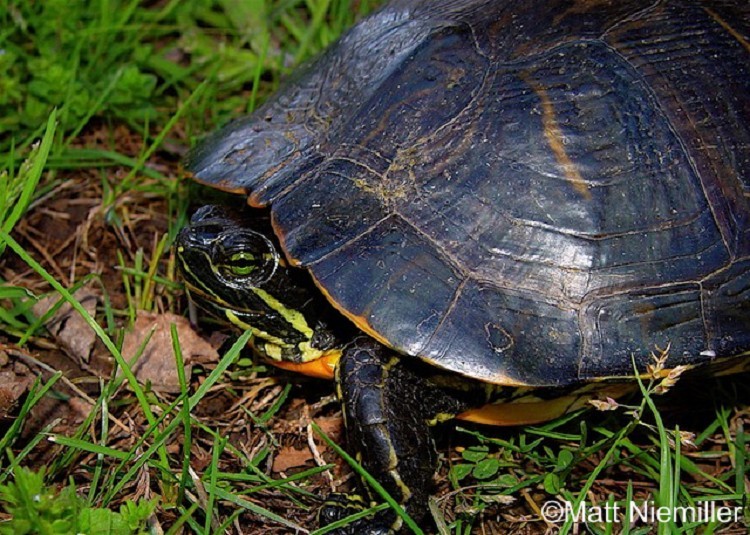