White-tailed deer belong to the order of artiodactyla and family Cervidae and may live up to 12 years in the wild, although they rarely reach anything over seven years of age.

Hunting is the number one cause of mortality for adult white-tailed deer in many parts of their range, including Tennessee.

The summer coat of a white-tailed deer is reddish-brown, while its winter coat is gray.

Young fawns have white spots on their coats as camouflage for hiding from predators.

The average live weight for adult males in Tennessee is 140 pounds, and average the live weight size for females is 100 pounds.

Sexually mature males, known as bucks, grow antlers in the spring/summer of each year.   Antlers are vascular extensions of the skull covered with hairy skin, called velvet, during the growing period.

Once the antlers are fully developed, the males rub the velvet off, exposing the bone antlers. Antlers remain on the bucks until after the breeding season, when they are shed.

Antlers may vary from small spikes that grow only a few inches above the skin to much larger racks including multiple points.  Conversely, buck fawns only have small bony growths, which do not protrude through the skin, during the fall and winter after their birth.

The gestation period is around 199 days, and the fawns are weaned at 3-4 months of age. Although, young females may stay with their mothers for an extended amount of time and ultimately overlap her home range.

Alternatively, yearling males disperse away from their mother; which is thought to prevent inbreeding.

White-tailed deer are generalists, thriving in a variety of habitat types. Deer can be found from sea level to high elevations in the mountains.

Deer populations in Tennessee are affected by hemorrhagic disease (HD) on occasion. HD may be caused by many serotypes of viruses causing epizootic hemorrhagic disease (EHD) and bluetongue. These viruses are transmitted through a biting fly or midge in the genus Culicoides. Deer become infected after being bitten by a midge carrying the virus.

Deer with HD often lose their appetite and fear of humans.  Furthermore, they salivate excessively and have an increased pulse, respiration rate, and temperature. Some deer may survive and recover from the disease, but many die and are often found in or near water.   Hemorrhagic disease has not been found to be a danger to humans.

White-tailed deer are the most economically important big game species in Tennessee.   However, deer overpopulation can lead to damage and problems for human safety.   For example, deer have the potential to cause damage to crops and other ornamental plants.   Additionally, deer-vehicle collisions affect human safety and can cause economic loss.    Lastly, parasites (e.g., ticks) commonly associated with deer can present human health challenges.

White-tailed deer have played an important role in the lives of humans for generations and will continue to do so.   They were essential as a source of food, clothing, tool materials and currency for Native Americans and European settlers.  Today, white-tailed deer continue to be a highly-valued resource for Tennesseans, especially for hunters and other wildlife enthusiasts.

What is CWD and What Animals are Affected?

CWD is a contagious and a fatal neurological disorder that affects members of the deer family known scientifically as cervids.  Import restrictions have been designed to protect these native herds.

In Tennessee cervids include deer and elk. Other states have deer and elk populations too, but some also have moose, mule deer and other big game cervids that sportsmen travel out of state to hunt.

White-tailed deer are common in Tennessee, while a small population of elk can be found in the eastern portion of the state.  While CWD is considered 100 percent fatal once contracted, it is not known to harm humans or livestock. 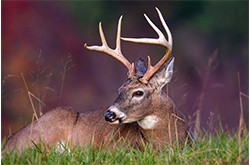 The range of white-tailed deer (Odocoileus virginianus) in Tennessee has expanded from a few counties in east Tennessee in the 1940's to all 95 counties in the state.

Herd growth has been such that hunting is allowed in all Tennessee counties with the Tennessee deer herd numbering approximately 900,000 animals.   Growth of the Tennessee deer herd is expected to continue to increase at 1-2 % per year for the near future with most expansion occurring in the Mississippi River counties and in eastern Tennessee. Due to less productive habitat and other factors, eastern Tennessee has been the slowest area of the state for deer population growth.

The deer herd in middle and west Tennessee has reached the point in some areas where management efforts are focused at slowing or stabilizing herd growth, and sometimes reducing the overall size of the herd. These population trends and goals should continue into the near future.

Past, Present & Future Use

From 1940 to 1985 over 9,000 deer were released into various counties and wildlife management areas of Tennessee. Coverage of the state was relatively complete during this effort, and deer populations were successfully established statewide (Tennessee Wildlife Resources Agency 1991).

Because of restoration initiatives, effective game laws, and wise management, the deer herd in Tennessee has increased dramatically from approximately 2,000 deer in the 1940's to an estimated 900,000 animals in 2005.   To date, the majority of the herd exists in middle and western Tennessee, while densities in the Mississippi River counties, the Cumberland Plateau, and far eastern portions of the state remain below desired levels.

The increasing deer population has been reflected in an increasing harvest, which was a record 179,542 deer during the 2004/05 season. Hunter success has grown with the increasing harvests, hitting an all-time high in 2004 with 46% of deer hunters harvesting at least one deer.   Although hunter numbers have declined slightly since their peak of 242,000 in 1999, they have remained relatively stable since the turn of the century, averaging 217,400 deer hunters per year.

The economy of Tennessee has benefited from the rise in deer numbers in terms of increased revenues to small businesses in rural areas, sporting goods businesses, hotels and restaurants, etc.

In recent years, the Agency's attention has turned to increasing and maintaining the doe harvest in order to control herd growth.  This has been accomplished through liberalized antlerless bag limits, liberalized deer tagging regulations, increased seasons, and increased non-quota antlerless hunting opportunities.

Overall, this strategy has worked relatively well, as most areas are harvesting the desired number of does (Tennessee Wildlife Resources Agency 2005). The percentage of does in the overall harvest has increased steadily from 19% in 1984 to 32% in 1994 to 45% in 2004.

In response to the growing popularity of quality deer management (QDM), the Agency has continually researched QDM initiatives. QDM is generally defined by three principles;

Although the State does not argue the importance and legitimacy of all three practices, QDM can not be practiced on a statewide basis since it is impossible for the Agency to provide optimum habitat statewide due to the expanse and physiographic variability of the land.   Therefore, QDM is best left as a management tool utilized by individual hunters and/or landowners.   Statewide regulations have allowed QDM practitioners to implement their strategies with great success, while also keeping non-QDM practitioners happy.  Human dimension studies conducted by the University of Tennessee show a deer hunting satisfaction rate of approximately 80% between the years 2000-2004.

Historical data from Tennessee suggests that there has been no negative impact on the herd due to lower buck limits (11-buck limit pre-1998, 3-buck limit post-1998).   A comparison of buck age structure from annual deer harvest suggests that the Tennessee deer herd compares favorably with those states with more restrictive buck regulations.

It is the Agency’s belief that hunting opportunities should be as liberal as possible without having a negative impact on the herd; therefore, more restrictive regulations should not be adopted unless it is the will of the majority of the hunting public. The Agency’s deer management program has achieved an 82% approval rate utilizing this philosophy (University of Tennessee 2004).

As we progress into the future, the Agency faces a number of challenges in its deer management program. Perhaps number one among these challenges are the problems caused by the stabilization and/or reduction in the numbers of hunters.   With the overall deer herd increasing at an estimated rate of 1-2% per year, and especially with the anticipated herd growth in eastern and far western Tennessee in the next few years, it will become more difficult to harvest the necessary number of does with little or no growth in hunter numbers.

The second most challenging aspect results from the lack of communication between the Agency and hunters. All too often, hunters rely on outside sources of information regarding deer and deer hunting. These outside sources sometimes do not give the proper information, or even worse, feed hunters misguided, commercially based information which does not pertain to statewide management.

It is in the best interest of the Agency to ensure our hunters are given the best and most accurate information possible in regards to Tennessee deer management.

Over the next 15 years, public demand for deer hunting is expected to remain at current levels or possibly increase slightly. With ever burgeoning human populations encroaching into prime deer habitat, the tolerance level of people experiencing deer damage may result in a lowering of the cultural carrying capacity.

Balancing healthy deer herds and human tolerance levels will be a focus of the deer management program for decades to come.

In determining Current and Projected Status and Past, Present And Future Use, this report relied heavily on deer harvest data that was obtained through Tennessee’s mandatory deer harvest check-in system. This check-in system has been in place for the majority of the time that Tennesseans have been participating in modern deer hunting. The check-in information also provided harvest figures to run and validate deer population models that are used to determine deer harvest management strategies for Tennessee counties and the state as a whole.