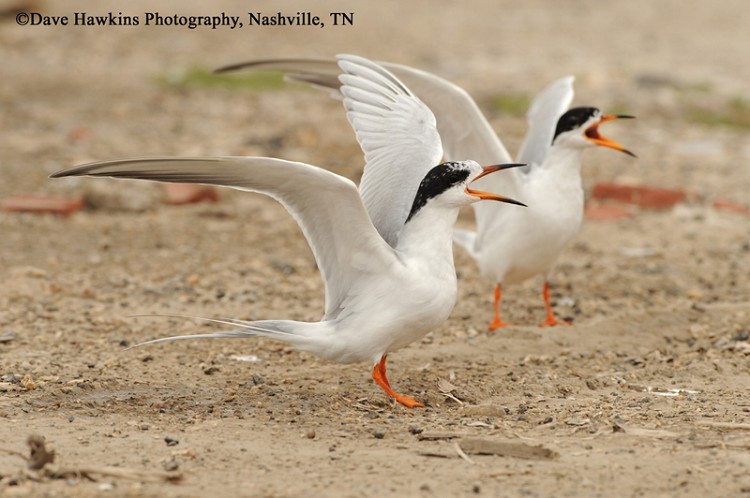 Forster's Tern is the only tern restricted almost entirely to North America throughout the year.  Of the medium-sized terns found in the eastern United States, it is the most likely species to be observed in Tennessee.

It stops along lakes and rivers during spring and fall migration, but is rarely present during the winter or summer.  It breeds on freshwater lakes and marshes in scattered locations in central North America, California, and along the Atlantic and Gulf coasts. It winters along the California, and lower Atlantic coasts, with smaller numbers inland.

Description: The Forster's Tern is a medium-sized tern, with pale wings that are darker at the tip, a long, deeply forked tail, and orange legs.

In breeding plumage (March-August), it is mostly white with a pale gray back, a black cap on the head that extends to below the eye, and an orange bill with a black tip.

In non-breeding plumage (August-February), the black cap is reduced to a black patch on the side of the face.  The top of the head and forehead are white, the bill is black, and the feet are a duller orange.

Males and females look alike.  The ear-patch of non-breeding and immature Forster's Terns is distinctive.

Habitat: In Tennessee, found along lakes and rivers.

Nesting and reproduction: There are no records of this species nesting in Tennessee.

Status in Tennessee: Forster's Tern is fairly common during spring and fall migration, and rare at other times of the year. In spring, it usually arrives by late April and departs by mid-May.

In fall, it is in the state generally from late July to early October. It is more likely to be found in Tennessee than the similar appearing Common Tern. A sighting on J. Percy Priest Lake on 28 December 2009 was a very late record of the species in winter (S. Somershoe).

Best places to see in Tennessee: Most likely to be seen along lakes and rivers, in all regions of the state, between late April and mid-May, and again in late July and early October.