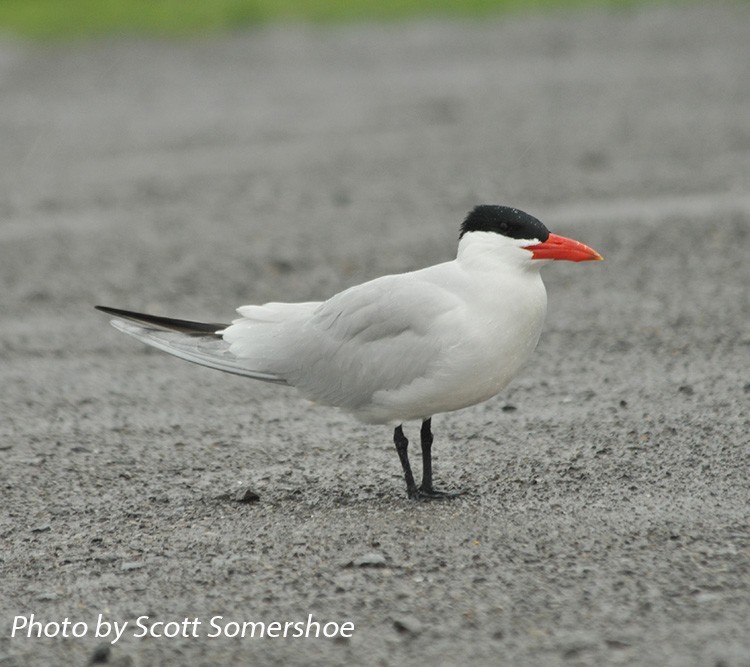 The Caspian Tern is as large as a gull, but it is easily identified as a tern by its large coral-red bill.  It is the largest tern in the world, and ranges worldwide with the exception of Antarctica.

In North America, it breeds in scattered locations along the Atlantic, Gulf and Pacific coasts, as well as inland in the prairies and along the Great Lakes.  In winter, the North American populations winter along the southern Atlantic, Pacific and Gulf Coasts as far south as northern South America.

The Caspian Tern is an uncommon migrant in Tennessee, more frequently seen in the fall, and occasionally seen in large flocks of 100 or more individuals.

Description: This large, gull-like tern has a black cap, and a large, thick, black-tipped red bill.  It is pale gray above and white body below, with gray primaries on the underside of the wing, and a white, relatively short, slightly forked tail.

Immature birds (July-October) have a blackish crown, somewhat modeled back feathers, and the bill can appear orange. Often hovers above the water before diving.

Habitat: In Tennessee, found on large lakes and rivers.

Nesting and reproduction: The Caspian Tern has never been known to nest in Tennessee.

Status in Tennessee: Uncommon spring and fall migrant, and rare winter visitor across the state. More frequently seen in the fall, when large flocks are occasionally found. May be present in the state from mid-April to mid-May, and from late July to early November, but occasionally also in winter.

Best place to see in Tennessee: Seen in late summer (late August) on large lakes and reservoirs, although infrequently encountered. The Gallatin Steam Plant in Middle Tennessee is a good place to look for them in late summer.