It breeds in freshwater wetlands across Canada and more sparsely across the northern half of the United States. It winters in wetlands along the southern Atlantic coast where temperatures remain above freezing, the Gulf Coast, and southern California southward into Mexico and the Caribbean.

Description: This medium-sized, stocky heron has a thick neck and bill, and is overall warm brown with a bold brown and white streaked neck. In flight, contrasting dark flight feathers are conspicuous.

Habitat: Marshes with tall, emergent vegetation such as cattails, bulrushes, and grasses.

Nesting and reproduction: Tennessee is south of the normal breeding range of the American Bittern. There have been no confirmed recent nesting attempts.

Status in Tennessee: The American Bittern is an uncommon migrant and a very rare summer and winter resident in the state.  It is usually encountered during migration in mid-March through May and then again from late September through mid-November.

There are scattered nesting records from the southern part of the state but none in recent years. 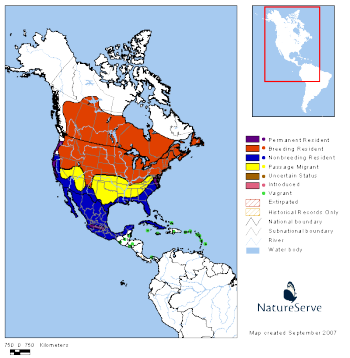 Best places to see in Tennessee: Large marshes with tall emergent vegetation across the state.