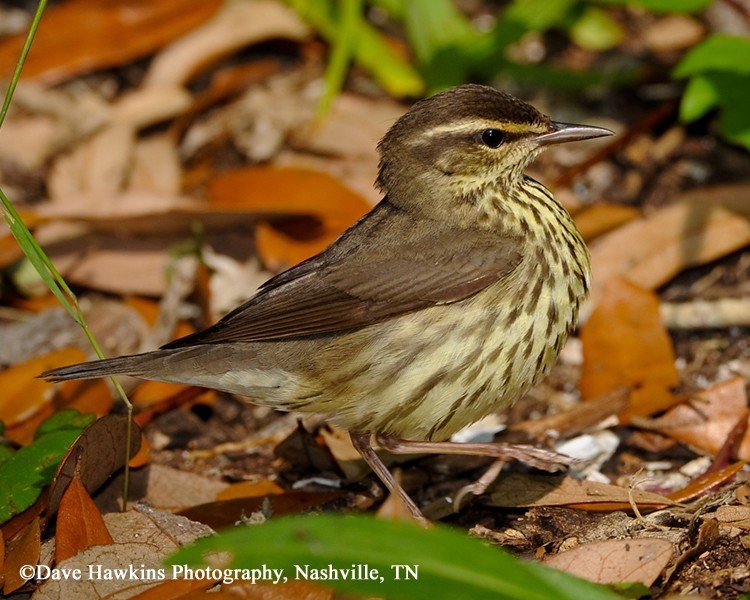 As its name implies, the Northern Waterthrush is rarely found far from water.   This large, tail-bobbing wood-warbler is found in Tennessee only during migration.

Its breeding range stretches across Alaska and Canada, and into the northeastern states, where its ringing song is heard in wooded swamps and bogs.  It winters from southern Mexico to northern South America inhabiting a variety of wooded habitats that are often tied to mangroves.

In migration it is usually found near standing water in wooded areas.  The Northern Waterthrush may be present in Tennessee from mid-April to mid-May, and then again from late August to early October.

Description: Small, songbird dark brown above, white to creamy below with dark, heavy streaks, and the white to buff stripe over the eye tapers toward the rear.  Waterthrush walk rather than hop, and constantly bob their tails. Males, females and juveniles are similar.

Voice: Song is loud and emphatic, starting with clear notes on one pitch, followed by more rapid phrases dropping slight in pitch. The call is a sharp, metallic chink.

Nesting and reproduction: The Northern Waterthrush has not been documented nesting in Tennessee.

Status in Tennessee: Uncommon migrant. Found in spring from mid-April to mid-May, and in the fall from late August to early October.

Best places to see in Tennessee: May be seen statewide in appropriate habitat during spring and fall migration.