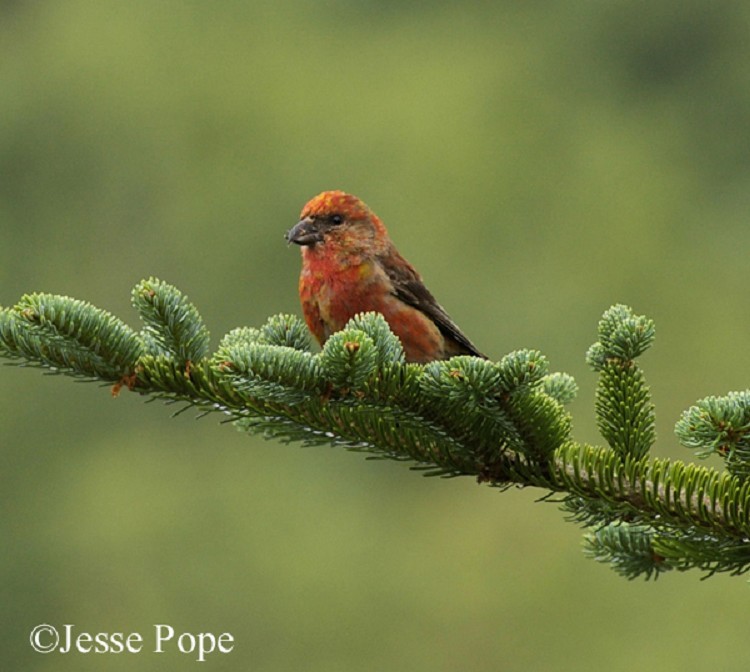 The crossed-bill of the Red Crossbill allows it to extract seeds from pinecones.  This dependence on pine seeds causes it to be a nomadic species, breeding whenever and wherever it finds an abundance of cones.

In the southeastern United States, breeding records of Red Crossbills extend from February through October. This species breeds across the boreal forest of North America, and recent research indicates that there may be as many as nine discrete populations, and may represent nine separate species.

This flocking species is a regular but uncommon year-round resident in Tennessee, especially found in the southern Appalachian Mountains, particularly in Great Smoky Mountain National Park, and is a rare, irregular visitor elsewhere in the state.

Description: Males are an overall dull red, and females are overall greenish. Both have a solid, darker plain wing, a short, notched tail, and a thick bill that is curved so that the tips are crossed. Immature birds (January-September) have a heavily streaked, whitish chest, with a brown streaked back, and the bill becomes crossed shortly after fledging.

Nesting and reproduction: There have been few confirmed breeding records in Tennessee. Before 1966, all 7 of the breeding records in TN were of juvenile birds seen in the GSMNP. Unexpectedly, in 1991 during the Tennessee Breeding Bird Atlas period, 2 fledgling crossbills were found in some loblolly pines, full of cones, on a golf course in Shelby County.

Incubation: Females alone incubate the eggs for 12 to 18 days.

Fledging: Both adults feed the young, which fledge in about 15 to 20 days.

Nest: The female builds the bulky nest on a horizontal tree branch, usually far from the trunk.

Status in Tennessee: The Red Crossbill may occur in Tennessee in any month of the year. It is a rare, irregular winter resident across the state, more likely to be seen during "invasion" years. In East Tennessee it is a locally uncommon summer resident, typically found at the highest elevations in the mountains. It is more likely to be found in the state from mid-November to mid-April.

Best places to see in Tennessee: Great Smoky Mountains National Park is the most reliable place to find them, but they are never regularly seen anywhere.