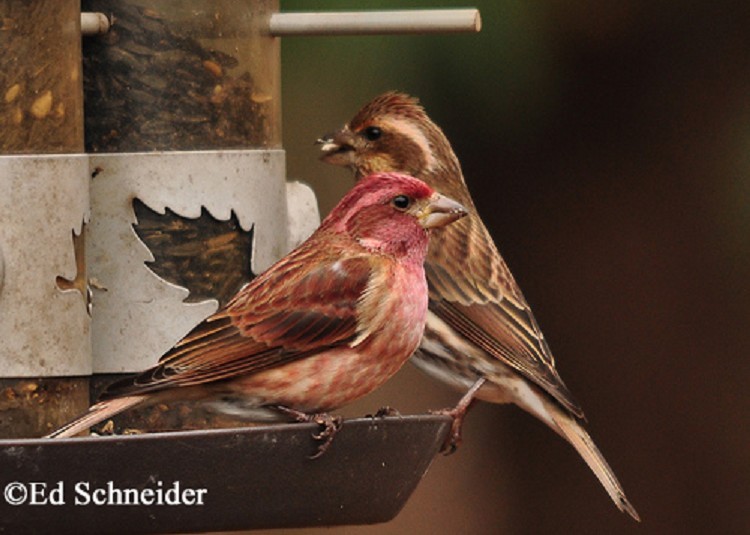 The Purple Finch is a bird of the northern coniferous forests that visits Tennessee only in the winter.  It usually arrives by mid-October and departs in late April, but their numbers vary from year to year.

It is an "irruptive" species and the variation in the number of wintering birds is thought to be associated with annual variations in the production of northern conifer cones. Purple Finches breed in the coniferous and mixed forests across Canada and the northeastern United States, south into the Appalachian Mountains and along the Pacific coast. Birds nesting in Canada migrate to the United States in winter.

Description: The male is a raspberry-red with browner wings and back, and a white belly. The female and first-year male are streaked brown and white with a bold face pattern, and a white line above the eye. The bill is stout, and the tail is notched in both male and female.

Status in Tennessee: The Purple Finch is a common migrant and winter resident throughout the state. It arrives by mid-October and departs by late April. It is an "irruptive" species and is more abundant some winters than others. While Purple Finches have been observed on Roan Mountain in Tennessee during the breeding season, the closest nesting birds are in West Virginia. Rangewide the population is declining.

Best places to see in Tennessee: Purple Finches frequently visit bird feeders rangewide, but can be found in forests statewide in winter.

For details on distinguishing Purple Finch from House Finch