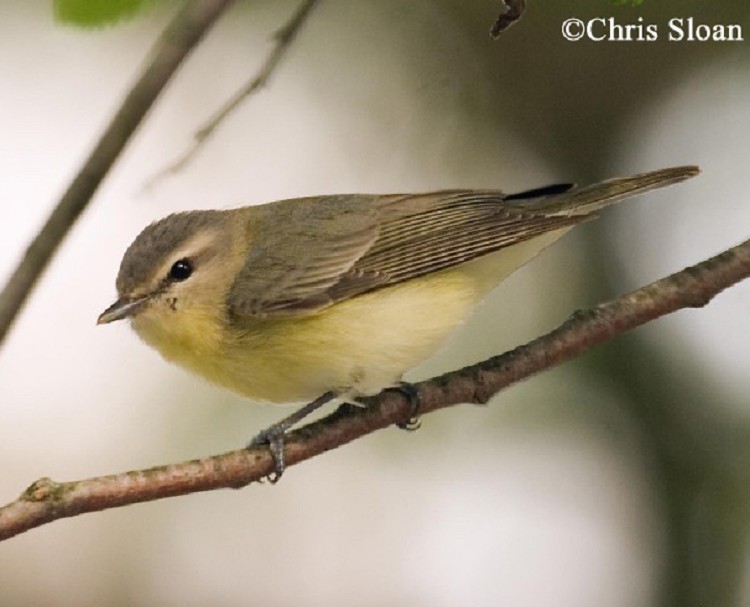 The Philadelphia Vireo is a migrant in Tennessee, but is often overlooked because of its resemblance to the much more abundant Red-eyed Vireo in both plumage and voice.   The Philadelphia Vireo breeds across southern Canada, further north than any of the other vireo species, and winters in southern Central America.   In Tennessee this vireo is most likely to be found in the western part of the state from late April to early May and then again from mid-September to mid-October.

Description: This small drab songbird has a short stout bill, a grayish-green back, is pale yellow below, has dark eyes, a dark line running through the eye, and has a white stripe over the eye. It has no wing-bars, tail-spots, or eye-ring. The male and female are alike in plumage.

Voice: The song is similar to a Red-eyed Vireo but is higher pitched, weaker and choppier.

Diet: Insects, caterpillars, and some fruit.

Nesting and reproduction: The Philadelphia Vireo has not been documented nesting in Tennessee.

Status in Tennessee: Uncommon migrant across Tennessee, but more frequently encountered in the western part of the state.

Best places to see in Tennessee: Always difficult to see, but found in woodlands and forest edges, especially the western part of the state, during migration.