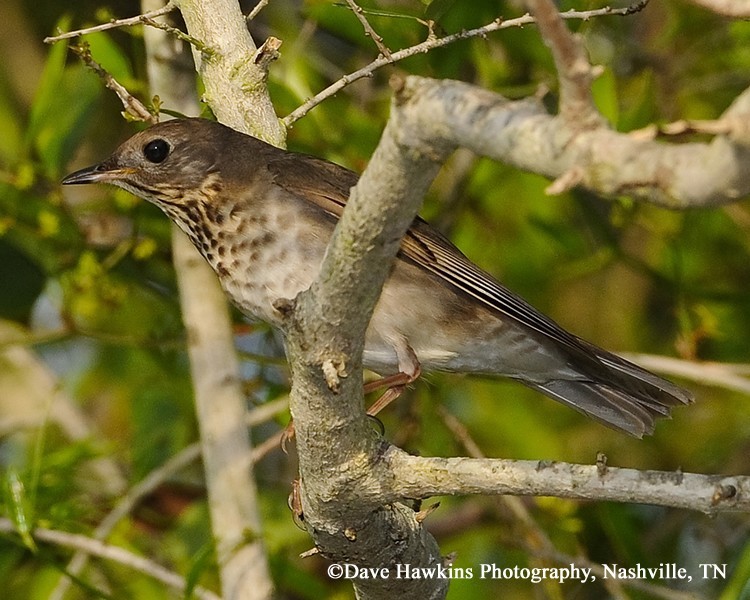 The Gray-cheeked Thrush is a relatively shy species, especially during migration when it passes through Tennessee.  It is the least well studies of the spotted thrushes, and has the most northern breeding range stretching across the taiga from Newfoundland to eastern Siberia.  The non-breeding range is not well known, but includes parts of South America east of the Andes from Colombia, to northwestern Brazil.

The Gray-cheeked Thrush is a regular, but uncommon spring and fall migrant across Tennessee, and is most likely to be found in wooded areas with thick undergrowth.

Description: This medium-sized thrush has brownish-gray upperparts and tail, is pale below with heavier spotting on the breast than other thrushes, a plain gray face with some light streaks but no eye-ring.

Voice: Song is a descending spiral, similar to that of the Veery, but higher, thinner, and more nasal.

Diet: Insects and other arthropods, fruit.

Nesting and reproduction: The Gray-cheeked Thrush has never been known to nest in Tennessee.

Status in Tennessee: The Gray-cheeked Thrush is a regular, but uncommon spring and fall migrant, and very rare summer visitor across the state.

Best place to see in Tennessee: Wooded areas across the state during spring and fall migration.