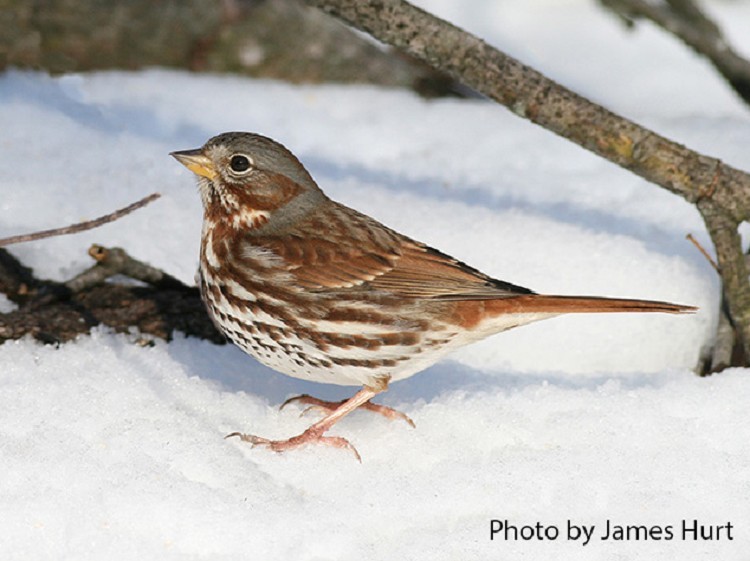 The Fox Sparrow is a large sparrow that can be found in Tennessee during migration and in the winter.  It frequently visits feeders, and its noisy double-footed scratching behavior makes it somewhat easier to detect while foraging in the leaf litter.

This species has a large range that extends from the Aleutian islands of Alaska, across the northern forest of Canada, and south into California and Colorado. It comes in four distinct color-morphs, and the one most likely to be found in Tennessee is the Red or eastern form that breeds in the boreal forest of Canada and winters in the southeastern United States.

Description: This large stocky, round-headed sparrow is heavily streaked on the chest, with a messy central breast-spot, and a reddish tail. The "Red" Fox Sparrow has a reddish back with a gray rump, reddish streaks on the chest, and a gray and reddish patterned face. Adults and immatures look similar.

Voice: The song, which can be heard occasionally on warm winter days, is a low, rich, melodious warble.

Nesting and reproduction: There are no records of Fox Sparrows nesting in Tennessee.

Status in Tennessee: The Fox Sparrow is a regular, uncommon migrant across the state, and an uncommon winter resident mostly in Middle and West Tennessee. It usually arrives by mid-October and departs by early April.

Best place to see in Tennessee: The Fox Sparrow can be found in a variety of shrubby habitats, woodland edges, and at feeders, across the state.