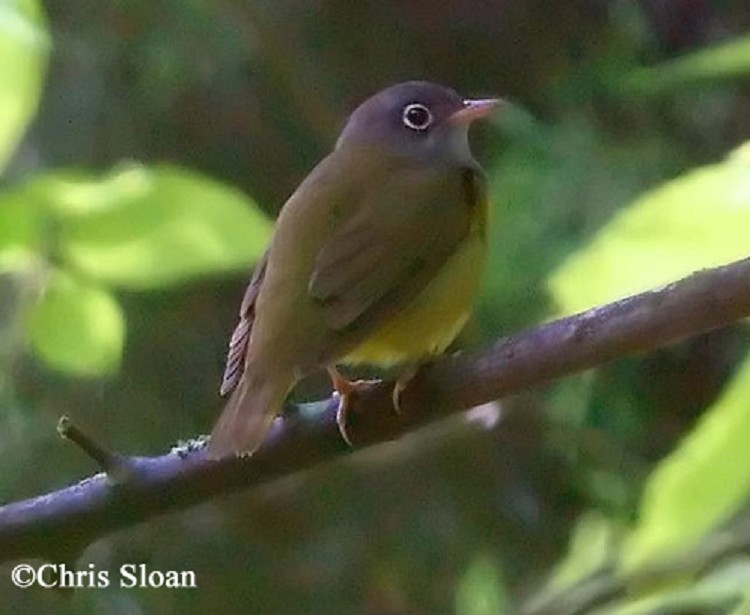 The large "skulking" Connecticut warbler is a rare migrant in Tennessee, and usually found low in thickets foraging on or near the ground.  It breeds in the boreal forest of central Canada and the states bordering the Great Lakes, and migrates to the forest of the Amazon region in South America.

Alexander Wilson was the first to describe this bird while visiting the state of Connecticut in the fall of 1812.  Interestingly, it is only an uncommon migrant there. While the Connecticut Warbler is a rare migrant throughout Tennessee, it is more frequently encountered in spring in the middle and eastern parts of the state from late April to late May, and possibly in the fall from early September to mid-October.

Description: Both the male and female are olive-gray above, dull yellow below, have a slate-gray hood, and a bold white eye-ring. The legs are a bright pink. Juvenile is similar to adult, but with duller and browner head and a paler throat.

Habitat: In migration it can be found in weedy and shrubby thickets and in wooded areas with dense underbrush. It usually stays low and close to the ground.

Diet: Spiders, insects, and some fruit.

Nesting and reproduction: The Connecticut Warbler has not been documented nesting in Tennessee.

Status in Tennessee: Rare migrant; more frequently seen in spring in Middle and East Tennessee; extremely rare in West Tennessee; few fall records exist statewide. Possible dates to see this bird are from late April to late May and again from early September to mid-October.