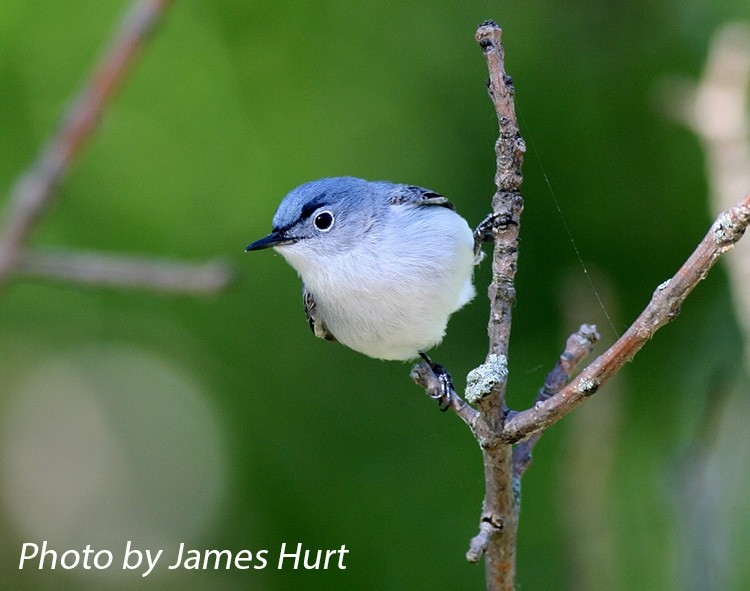 This tiny, active, long-tailed songbird is one of the first migrants to return to Tennessee in the spring. The Blue-gray Gnatcatcher arrives in late March and its thin, nasal spee call can be heard in deciduous forests across the state.  It usually forages with its tail cocked, flicking it from side to side.  This behavior may flush insects that the gnatcatcher then sallies out to catch.

The breeding range extends across much of the lower 48 states southward into Central America. The Blue-gray Gnatcatcher spends the winter in the southern United States, Cuba, and Central America.

Description: The Blue-gray Gnatcatcher is bluish-gray above, white below, and has a tail almost as long as the body with white outer tail feathers. It has a white eye-ring, a small thin bill, and no wing-bars. The sexes are similar but the breeding male is slightly darker gray, with a black line from the bill to behind the eyes.

Voice: The call is a high-pitched series of thin nasal spee notes. The song is a soft jumble of warbling notes.

Habitat: Breeds in a variety of deciduous wooded habitats from shrubland to mature forest, especially near water.

Nesting and reproduction: Blue-gray Gnatcatcher population densities are highest in the South, especially in floodplains and swamps. They often raise two broods in a season, and males will leave the newly fledged young with the female as he starts construction on a new nest.

Incubation: Both the male and female incubate the eggs for about 13 days.

Fledging: Both parents feed the young, which fledge in about 13 days.

Nest: The nest, built by both adults, is an open, high-walled cup made of dead grasses and plant fiber held together with spider webbing or caterpillar silk.  Bits of lichens attached to the outside help to camouflage the nest. Construction of the first nest takes 8 to 14 days.

The male alone builds the nest for a second brood constructing it with "recycled" material from the first nest. Nests are usually placed far out from the tree trunk on a horizontal branch. Nest heights in Tennessee range from 6 to 45 feet above the ground, with an average height of 21 feet.

Status in Tennessee: The Blue-gray Gnatcatcher is a fairly common summer resident of woodlands and woodland edges across the state. It arrives in late March and departs by late September. The population appears to be stable.

Best places to see in Tennessee: Blue-gray Gnatcatchers can be found in most large deciduous woodlands across the state. The best time of year to see them is in the spring before the trees leaf out, and when they are frequently singing.  Wildlife Viewing Areas