How Old is That Buck?

The restoration of white-tailed deer populations across Tennessee, as well as the entire Southeastern United States, has been one of the most successful wildlife management programs in history.

Yet, now that deer herds have been restored to most areas, hunters have become interested in other forms of deer management beyond restoration management. Instead of managing for larger populations, sportsmen are now practicing more specialized forms of management intended to produce older and larger deer. Many of these programs, such as Quality Deer Management (QOM), involve protecting young bucks from harvest in the hopes they will survive to older ages. For those participating in such efforts, understanding deer age is critical.

The standard method for aging deer involves examining their teeth. Using the Severinghaus Tooth Replacement and Wear Technique,  the approximate age of a deer can be assessed by examining a deer's lower jaw and determining how many teeth the deer has, whether the teeth are baby (milk) teeth or permanent adult teeth, and the amount of wear on the teeth.

However, to use this aging technique, the deer must have been harvested and in-hand for examina­tion. This doesn't help those who are practicing forms of management that require protecting or harvesting specific age groups.

For those practicing QOM or other age-specific forms of manage­ment, it's critical to know a deer's age before pulling the trigger. This has led to the development of a specific skill, or practice, often called "field judging" age. It involves learning to recognize body shape

characteristics, especially for bucks. The ability to judge age by body shape is more an art form than hard science. As bucks age, their bodies become larger, more muscular, and the proportions of their bodies change-the size of one part of the body compared to another. The "art" of field judging buck age is best de­scribed as the ability to compare all of these features size, musculature, and proportion--to produce a "best fit" age.

Many hunters believe they can identify a buck's age by the size of his antlers. And although it is true that-on average-bucks grow larger antlers with age, bucks of the same age can grow such a wide range of antler shapes and sizes that most identifiable antler characteristics cannot be used to assign bucks to specific age classes. For example, in Tennessee bucks with antlers scoring between 70 and 90 gross inches on the Boone and Crocket scoring system can be any age. This author has measured yearling bucks that scored more than 80 gross S&C inches and mature bucks that scored less than 80 gross inches. I've learned the hard way that using antler characteristics to judge age can lead to some embarrassing mistakes!

For most forms of specialized management, knowing the exact age of a buck is not as important as simply classifying bucks into one of three age-groups: young, middle­aged, and mature. Yearling bucks are generally considered young bucks. Middle-aged are those that are 2 ½

or 3 ½ years old. Once a buck has made it to 4 ½ years old or older, he is considered mature. Exactly which age group hunters manage for is determined by their man­agement strategies and goals, but learning to field judge buck age into one of these three groups is usually sufficient for most programs. 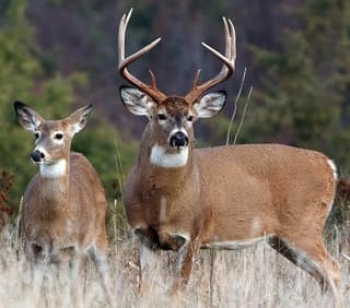 The body characteristics of yearling bucks are best described as "doe-like." In essence, they look very much like an adult does with antlers. A yearling buck, even during the rut, will not have a hugely swollen neck. 1t may be larger than a doe's neck, but in proportion to his entire body, it will still look slender. A yearling buck will also have a long, slender body, very much like an adult doe. He is not physically mature enough to have large, muscular shoulders and hams. Due to this lack of musculature, the outline of his shoulder blade is often visible. His hams will look somewhat angular. Viewing a yearling buck head-on will show he is very narrow through the shoulders and hams. His legs will also look long and slender in comparison to his body.

The easiest age group­ings to separate by body shape are the young bucks from the middle-aged bucks. By the time a buck reaches 2 ½ years old, he looks markedly different during the fall hunting season from a yearling. The biggest difference will be his neck. The neck of a 2 ½-year-old buck will appear noticeably swollen for the rut and will usually be the first body characteristic to catch a hunter's attention. A 2½­year-old buck will also display much deeper and more muscular shoulders. In fact, his shoulders and chest will appear slightly deeper vertically than his hams. His hams will have begun to look rounder and less angular than a yearling buck's. The best way to describe a 2½-year-old buck is that his body shape easily identifies him as a buck without the need to see his antlers.

Once a buck makes it to 3½ years of age, his neck has become quite enlarged throughout its entire length, although there will still be a distinct defining line between the base of his neck and the front of his shoulders. The muscles of his shoulders will completely hide his shoulder blade, and his shoulder muscles will be pronounced.

His trunk will be thick throughout its length and his hams will be filled out, hiding the upper leg bones. His hams will be rounded enough to produce a sharp crease between waist and hams.

Mature bucks can be distinguished from middle-aged bucks by their extreme musculature and the vertical thickness of their chest and body trunk. A 4½-year-old buck will have chests and shoulders so deep that they almost have a "buffalo" appearance and will give the visual impression of being front-end heavy. Their neck will be so large that there is almost no crease or definition between the base of the neck and the beginning of the shoulders. They will also display a noticeably distended brisket. The trunk of their body will be very thick and their hams will be quite rounded, looking very much like those of a thoroughbred racehorse. Viewed from straight on or behind, the body of a mature buck will appear nearly as wide as it is deep, and it is at maturity that a buck's body becomes so deep that his legs appear proportionally too short. A buck of this age generally looks very large, regardless of his antler size.

The 5½-year-old and older bucks are the true "bulls" of the forest. In fact, that is a perfect description of their body shape and walking gait. A 5½-year-old or older buck will have such a large neck that it appears to flow directly into his shoulders without definition, and he will have a pendulous brisket hanging down between his front legs. The trunk of his body will be so thick that he will display a fat, sagging belly, with his waistline nearly as deep as his chest. His hams will be extremely large and wide. Viewed from behind, his hams and shoulders will be as wide as or wider than his body is deep. Due to his heavyweight and thick body-frame, he will have the plodding, shuffling walking gait of a prize bull. In fact, his walking gait is so unique within the deer world that a 5 ½+ year-old buck can often be identified simply by the sound he makes walk­ing through the woods.

As mentioned previously, field judging buck age is more an art learned through experience than an exact science. Just like with people, a buck may be more or less muscular for his age. Other than being able to watch bucks of different ages in the wild, the best way to practice field judging buck age is with motion-sensitive trail-camera photographs. In fact, all of the pictures for this article were taken with trail-cameras.

With practice, it's amazing how quickly and accurately a hunter or manager can learn to place bucks into one of the three above described age groupings. And being able to judge buck age is the most important step to specialized management success.