Report a Sick or Dead Deer of Unknown Causes to TWRA

If you have seen a deer that appears abnormally thin, exhibiting strange behavior, or that has other anomalies that suggest the deer may be sick or diseased, please submit a report and enter pertinent information as prompted.

Citizen reporting is incredibly beneficial in helping us with the early detection of disease and herd health monitoring. Please fill out all fields (through the link above) including location and, if possible, include high-quality photographs of the deer.

The purpose of these citizen reports is to help TWRA gauge disease and health issues that might affect the Tennessee deer population. All reports are reviewed by a biologist to evaluate the severity of the circumstances. If the reviewing biologist determines an attempt for disease sampling is warranted and the contact information was included in the report, the biologist may contact the person who reported the sick deer for more information. Often, reports will not necessitate an onsite visit by TWRA. TWRA staff cannot remove deer carcasses. If you need help with deer carcass removal, please contact the local city or county authorities.

Reports that meet the criteria for a suspect Chronic Wasting Disease (CWD) case will be prioritized for sampling. For more information regarding CWD visit CWDinTN.com.

There is a very skinny deer in my area. Does it have CWD?

Not necessarily, but please report it anyway (using the link above). CWD is not a disease that can be diagnosed just by looking at a deer. Skinny deer may have insufficient nutrition, an injury, or one of several common diseases known to afflict deer. However, if your report fits the criteria for a suspect case of CWD, TWRA will attempt to sample the deer in question.

Currently, CWD has only been found in southwest TN, but citizen reporting of sick deer will help ensure early detection should CWD spread or be introduced in other parts of the state. Early detection is critical to the effective management of the disease.

For the most up to date information on CWD in TN, please visit cwdintn.com

I found dead deer in (or near) a body of water. What should I do?

Please report it by using the link above and enter the information as prompted. This is likely a case of hemorrhagic disease (HD), which TWRA also monitors.

Besides CWD, HD is the most significant disease affecting deer in Tennessee. It transmitted via a biting midge and is not transmissible to humans. HD is known to occur frequently in Tennessee and is more common during warm weather. However, the biting midges that transmit the HD usually die during the first hard frost, and the severity of outbreaks varies annually and geographically.

While TWRA may be unable to run definitive tests on every deer found dead, reports of suspect HD are encouraged so TWRA can monitor the disease’s impacts on deer populations.

There is an abandoned fawn. Does that mean it is sick? Should I report it?

TWRA does not need you to report sightings of fawns. Mother deer often temporarily leave their fawns alone in a place they feel is safe from predators. Please leave the fawn alone. More than likely, the mother is nearby and will be back later in the day. Any attempts to aid the fawn could delay the mother's return.

Should I try and help deer that are sick or injured?

No, treatment of sick or injured deer is highly unsuccessful and dangerous to the deer and the person trying to help. The additional stress/injury on the animal precludes safe treatment and often makes matters worse.

Very few rehabilitators are able to work with deer. However, some can work with very young fawns. You can find more information about Wildlife Rehabilitators and Educators through the TWRA Law Enforcement page.

There is a deer missing patches of fur. What’s wrong with it?

Several situations can lead to hair loss in deer, and it is not uncommon to see. The most common occurrence of hair loss in deer is when deer replace their coat in a process called a “molt”. Molting takes place twice a year, during the spring and in the late summer to early fall.  The molt can extend several weeks during which the coat may appear patchy or unkempt.

Other instances of hair loss in deer may be from lice, mange, or dermatophilosis (a.k.a. rain rot). A deer infested with lice may have thinning hair or complete loss of hair in patches from itching. The excessive rubbing or grooming can also lead to damaged and darkened skin. Mange occurs in deer with an overabundance of skin mites and may lead to an appearance much like that of a deer with lice. This includes hair loss from excessive rubbing or grooming and even roughened or scabbed skin.  If it has been particularly wet and warm outside, deer may exhibit dermatophilosis, or rain rot. This type of hair loss is from a bacterial infection and can also lead to lesions, scabs, and inflamed skin.

While these conditions may appear extreme, many cases resolve on their own when there are more resources available or the seasonal environment changes. These are not considered to have major impacts on the larger deer population but may impact deer locally. For monitoring purposes, we welcome reports of deer meeting these criteria. Please note that some of these conditions may pass between deer in areas of high deer density, such as at deer feeding sites, and it is best to not encourage the deer to congregate or frequently contact one another. 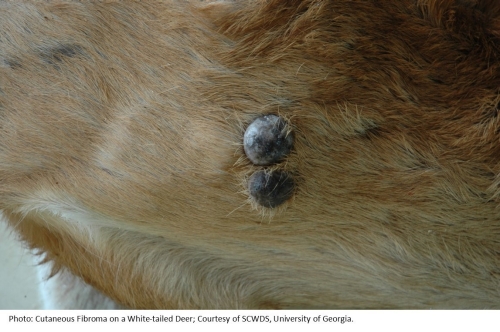 There is a deer with large black masses on it. What’s wrong with it?

The deer may have a large number of ticks, but it is most likely the deer has papillomas. This is a common skin condition of white-tailed deer and other Cervidae in North America. Papillomas are the equivalent of deer warts and they do not impact the meat of the animal. For monitoring purposes, we welcome reports of deer meeting these criteria.