PUBLIC NOTICE
The Tennessee Department of Transportation (TDOT) will no longer pursue the previously proposed long-term (up to 9 months) full-closure of the Interstate 55 (I-55) bridge over the Mississippi River during the reconstruction of the I-55 interchange at E.H. Crump Boulevard. The proposed improvements to this interchange were studied pursuant to the National Environmental Policy Act (NEPA), through the development of an Environmental Impact Statement (EIS), and the option for an up to 9-month full closure of the I-55 bridge during construction was being studied under a supplemental review to that EIS.

In January 2012, the Federal Highway Administration (FHWA) approved a Record of Decision (ROD), concluding the formal EIS development and identifying the Selected Alternative for the reconstruction of the I-55 interchange at E.H. Crump Boulevard. The Selected Alternative involves the replacement of the existing cloverleaf interchange with a new interchange configuration that will provide through lanes for mainline I-55 traffic, eliminating the need for interstate traffic to utilize single-lane, low-speed ramps in order to continue on mainline I-55. A new multi-lane roundabout interchange will be constructed to replace the existing cloverleaf interchange and provide improved access to and from I-55 and existing local roadways.

Following the issuance of the ROD, TDOT determined that a total closure of the I-55 bridge over the Mississippi River (Memphis-Arkansas Bridge) for up to nine months during construction may be necessary. On August 31, 2015, FHWA, in coordination with TDOT, published in the Federal Register a Notice of Intent (NOI) to prepare a Limited Scope Supplemental Environmental Impact Statement (LSSEIS) for the I-55 interchange at E.H. Crump Boulevard Project. The decision to pursue the LSSEIS was based on the potential for significant impacts associated with the potential for a long-term full closure (up to 9 months) of the I-55 Bridge over the Mississippi River during construction. A full closure of the I-55 Bridge for up to 9 months was not previously assessed and disclosed in the approved 2012 ROD or in the subsequent 2015 NEPA Reevaluation.

However, with the removal of this option from consideration, TDOT has determined that there are no changes to the project or any new information or circumstances that should warrant the preparation of an LSSEIS. Therefore, TDOT will cease development of the LSSEIS and instead pursue the development of a NEPA Reevaluation.

The most recent construction plans indicate that the basic setting of the affected environment has not been altered, and the project area is essentially of the same character as previously studied with no substantial modifications in land use or new development. There have been no changes to the project that would alter the findings documented in the approved 2012 ROD.

Project materials are available for public review in the Library section of this website.

Interstate 55 is one of the major north-south transportation corridors in the United States. The I-55 Interchange at E.H. Crump Boulevard and South Riverside Drive in Memphis, Shelby County, is utilized by high volumes of a combination of local commuter and through-traffic, including large volumes of commercial truck traffic. The existing interchange cannot handle the current and projected traffic volumes in the area. The purpose of the proposed project is to improve the I-55 / Crump Boulevard interchange by replacing the existing cloverleaf design with a new configuration that reduces crashes, relieves congestion, and provides route continuity for I-55.

The improvements to the I-55 / Crump Boulevard interchange will be accomplished by constructing new through travel lanes for mainline I-55 traffic, which will eliminate the requirement for interstate traffic to use single-lane, low-speed ramps in order to continue on I-55. A new multi-lane roundabout intersection will be constructed to replace the existing cloverleaf interchange and provide improved access to and from I-55 and existing local roadways. 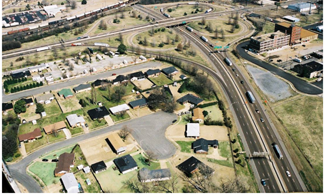 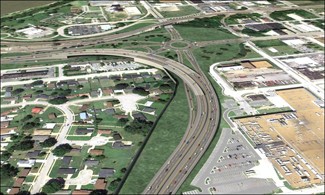 If remains, artifacts, or other archaeological materials are uncovered during construction, all construction in the area of the find will cease, and the Tennessee Division of Archaeology and recognized Native American tribes will be contacted immediately.

To receive email updates on this project, including lane closure information, follow the instructions below.