The project along Interstate 40 at the Donelson Pike interchange (Exit 216), southeast of downtown Nashville, involves relocation of the interchange and the existing state route. The newly constructed exit will be a diverging diamond interchange (DDI). The unique crisscross design of a DDI allows two directions of traffic to temporarily cross to opposite sides of the roadway in order to travel across the overpass, and then cross back and resume the original travel pattern. The DDI uses concrete dividers, stop bars, traffic signals, and extensive signage to guide motorists through the interchange.

SR 255 is an urban principal arterial located in the southeast quadrant of Nashville-Davidson County between SR 6/US 31/Franklin Pike and SR 24/US 70/Lebanon Pike. The corridor runs east to west as Harding Place and north to south as Donelson Pike, connecting I-65, I-24, and I-40.

The existing I-40/Donelson Pike interchange was built to provide access to a new airport terminal in the 1980s. Since then, Nashville International Airport (BNA) has been a major contributor to the rapid growth of the area, creating high volumes of both cargo- and traveler-related traffic. Future developments, including the expansion of BNA, are expected to increase traffic volumes.

The interchange is currently a trumpet design with restricted turning movements, connecting I-40 with Donelson Pike, which is a four-lane urban highway. The current configuration cannot accommodate the current and future traffic demands of Donelson Pike and BNA. 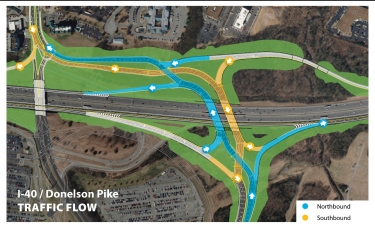 All other traffic will utilize the newly-constructed Donelson Pike and diverging diamond interchange to access I-40, Donelson Pike, the airport, or other areas north and south of the existing interchange.

The existing interchange (Donelson Pike over I-40) will be repurposed, primarily providing access to expanded BNA facilities. Construction of BNA property by Metro Nashville Airport Authority (MNAA) will occur simultaneously with the planned TDOT project. (see image of project limits) 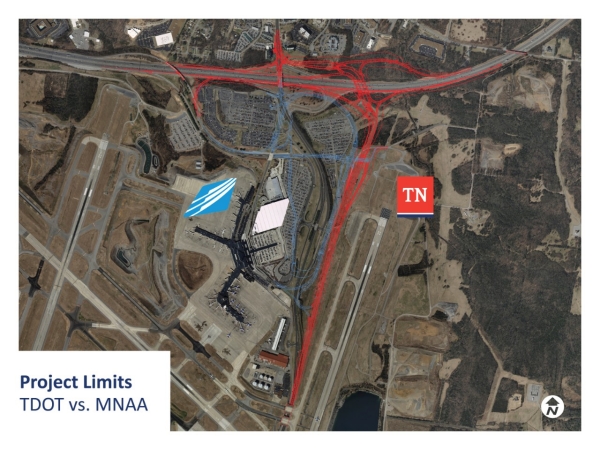