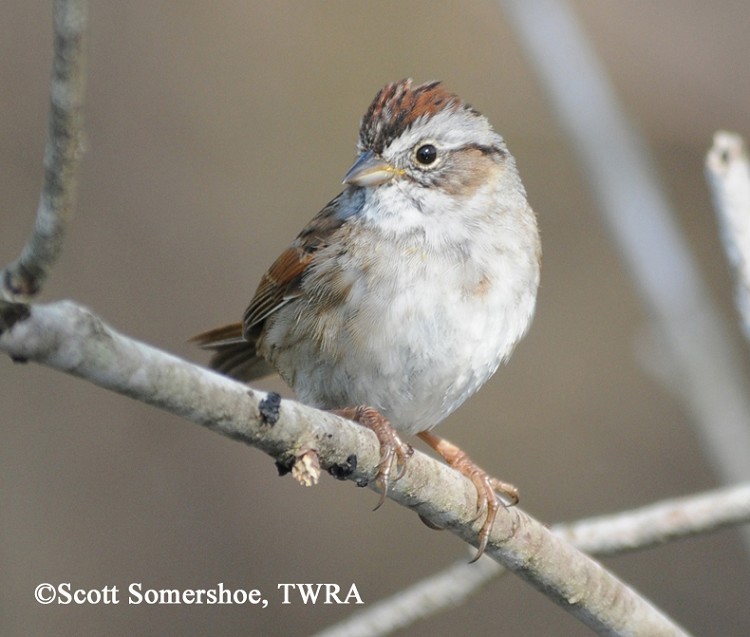 The swamp in Swamp Sparrow pretty well describes this bird's preferred habitat. It breeds in swamps in boreal Canada and the northeastern United States.  You can find it in brushy habitats that are either wet or near water in the southeast during the winter.

It is a secretive bird that hides in dense cover and forages mostly on the ground. When flushed, it will fly low over the grass tops, rarely more than a few dozen yards, and perch on a low branch or dive back into the vegetation.

Swamp Sparrows can be found in Tennessee from late September to early in May, alone or in loose flocks with Song Sparrows.

Description: Swamps Sparrows have rusty wings, a gray chest with blurry streaks, a whitish throat and belly, and a gray face and neck.

Habitat: Found in marshes and in low grassy or brushy fields, often near water.

Nesting and reproduction: The Swamp Sparrow has never been known to nest in Tennessee.

Status in Tennessee: This common migrant and statewide winter resident is present in the state from late September to early May.

Best places to see in Tennessee: Swamp Sparrows can be found across Tennessee from late September through early May in marshes and low grassy or brushy fields, often near water.