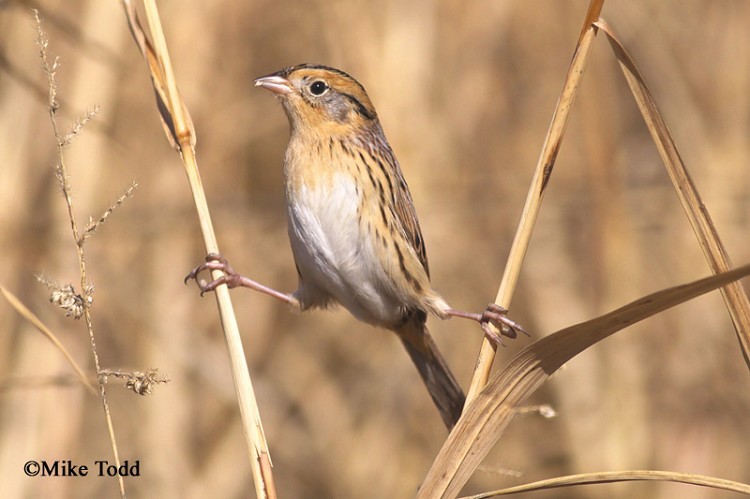 Le Conte's Sparrow is a beautiful but secretive sparrow that is a regular, but rare winter resident in Tennessee. It is found in grassy, weedy fields, especially fields with Panicum grass, and when persistently flushed by an observer, it will run along the ground and eventually hop up on an exposed perch for a moment.

It breeds in central Canada and adjoining northern states, and winters in the southern states from South Carolina to Texas. This bird is so elusive even on the breeding grounds that it took nearly 100 years for its nest to be discovered.

Description: The Le Conte's Sparrow is distinct with, as sparrows go, with a buffy-orange face and chest, a white crown-stripe, chestnut streaks on the back of the neck, and black streaks on the sides, which occasionally across the chest. The male and female look the same.

Nesting and reproduction: Le Conte's Sparrow has never been known to nest in Tennessee.

Status in Tennessee: This sparrow is an uncommon migrant and rare winter resident in the state, arriving in mid-October and departing by mid-April. Most winter records are from Middle and West Tennessee. Range-wide population trends are difficult to assess but may be declining due to loss of native grassland habitats.

Best places to see in Tennessee: Moist or wet brushy and weedy fields with Panicum Grass, also hedgerows and wooded edges during the winter in Middle and West Tennessee.