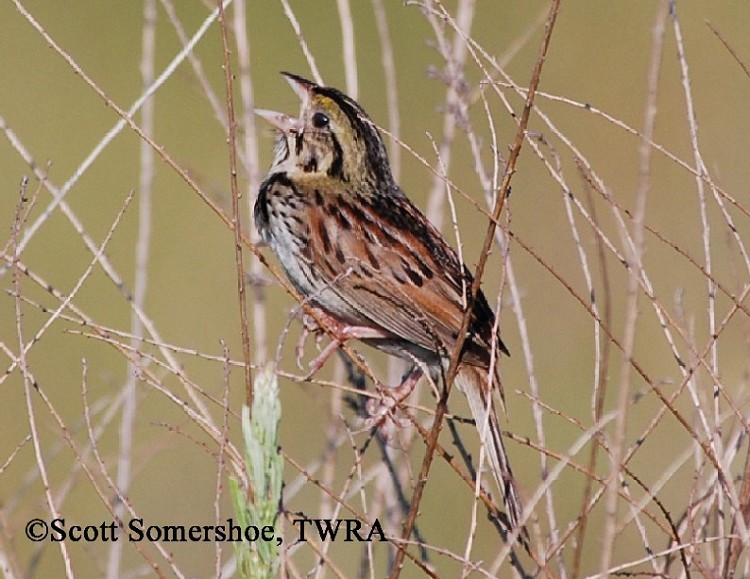 The Henslow's Sparrow's secretive nature makes identify its song extremely important when trying to find this small grassland bird. The male Henslow's will stand on a low perch, throw his head back, and belt out, what sounds like, a hiccup!

Its breeding habitat includes overgrown fields and meadows, often wet, with scattered low shrubs or saplings and standing dead vegetation from the previous season. The breeding range extends from the north-central United States eastward, and south to Kentucky and northern Virginia. It appears to have extended its breeding range into central Tennessee starting in the late 1990s. In winter, Henslow's Sparrow migrates to marshes and open pinewoods in the southeastern United States. Range-wide the species has been declining at an estimated 7.5% per year, primarily due to loss of breeding habitat.

This species can be found In Tennessee from mid-April until late October, and while it was listed as In-Need-of-Management in Tennessee in 2000, it appears to be increasing as a breeding bird in the state.

Description: The Henslow's Sparrow is a small, relatively large headed, short-tailed songbird that has dark brown streaked upperparts, a light brown sparsely streaked breast, a white throat and belly, an olive-green nape, two stripes on the lower face, and rust-colored wings. Juveniles (June-August) look similar to adults, but have more indistinct markings on the head and reduced streaking across the chest. Males and females look similar.

Voice: The song has been described as sounding like a hiccup, or a dry tsi-zleik. Henslow's sometimes sing on quiet nights.

Clutch Size: Ranges from 3 to 5 eggs, with 4 most common.

Incubation: The female alone incubates the eggs for about 11 days.

Fledging: The female does most of the feeding, and the young fledge in about 9 or 10 days.

Nest: It takes the female 5 or 6 days to build the well-concealed open-cup nest placed at the base of a grass tuft (usually) or up to 16 inches in the vegetation. The nest is constructed of loosely woven dry grasses.

Status in Tennessee: The Henslow's Sparrow is a rare migrant and recent breeding bird in Tennessee. It appears to have extended its breeding range into the state in the late 1990s, and was listed as In-need-of-management in 2000. The Henslow's Sparrow has been identified as a species of the highest priority for grassland bird conservation in eastern and mid-western North America by Partners in Flight (PIF), a cooperative effort of many organizations dedicated to bird conservation. This species can be found In Tennessee from mid-April until late October.