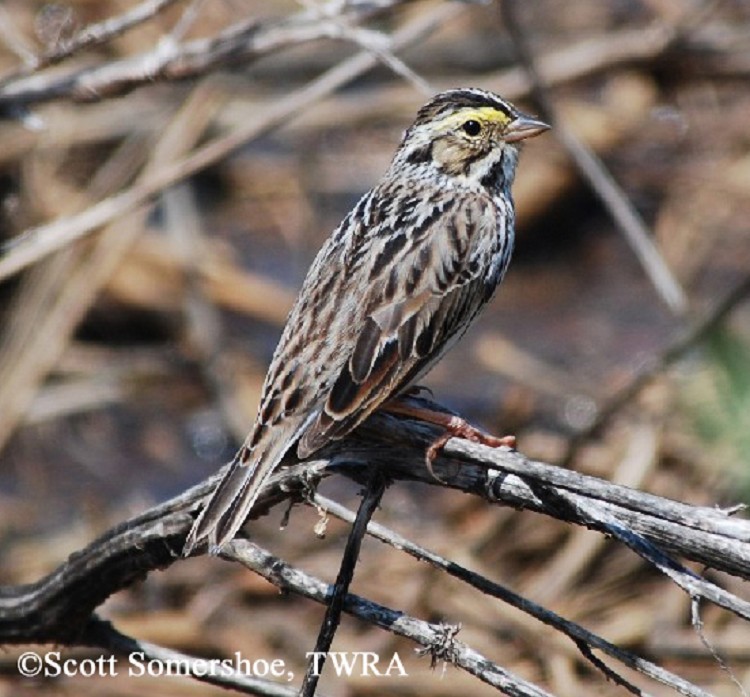 This secretive grassland sparrow,  is widespread and abundant in open habitats throughout North America.  While 17 subspecies are recognized across this range, the geographic variation in appearance is subtle.

Most populations are migratory, and the wintering range extends from the southern United States to northern South America, and the Caribbean. In Tennessee it can be found across the state where it is a fairly common to uncommon migrant and winter resident, and the Savannah Sparrow has become a recent breeding bird in the state.

The first nesting record for this species was in 1973 in Hawkins County, followed by a nest found in 1987 Washington County. In 1991, 10 singing males were found in a few different locations in Johnson County. Since then, breeding-season Savannah Sparrows have been reported in Carter, Cocke, Greene, and Sullivan Counties.

Often these breeding sites in the northeastern corner of Tennessee are shared with Grasshopper Sparrows, and occasionally with Vesper Sparrow.

Description: This small songbird is cleanly streaked with brown and gray above, and white and brown below, with a short, notched tail, and a yellowish eyebrow stripe. Immature birds (June-August) are similar to adults, but are buffier.

Voice: The song is an insect-like high, fine series of buzzes, each one lower-pitched than the preceding, with a low final buzz. The song is harsher and lower than Grasshopper Sparrow's song.

Habitat: A variety of open grassy habitats, and fallow fields.

Diet: Insects, and other small arthropods, also seeds, especially outside the breeding season.

Nesting and reproduction: Savannah Sparrows are monogamous and will often raise two broods in a season.

Incubation: Only the female incubates the eggs.

Fledging: Both adults feed the young. The male continues to tend the fledglings while the female starts the second nest.

Nest: The female alone builds the shallow cup-nest of woven grasses, placed on the ground, concealed by adjacent vegetation.

Status in Tennessee: The Savannah Sparrow is a regular, fairly common migrant across the state, and a relatively uncommon winter resident found especially in the southern half of the state. Migrants and winter residents arrive starting in mid-September and depart by early May. It is also a rare recent summer resident in the northeastern part of Tennessee.