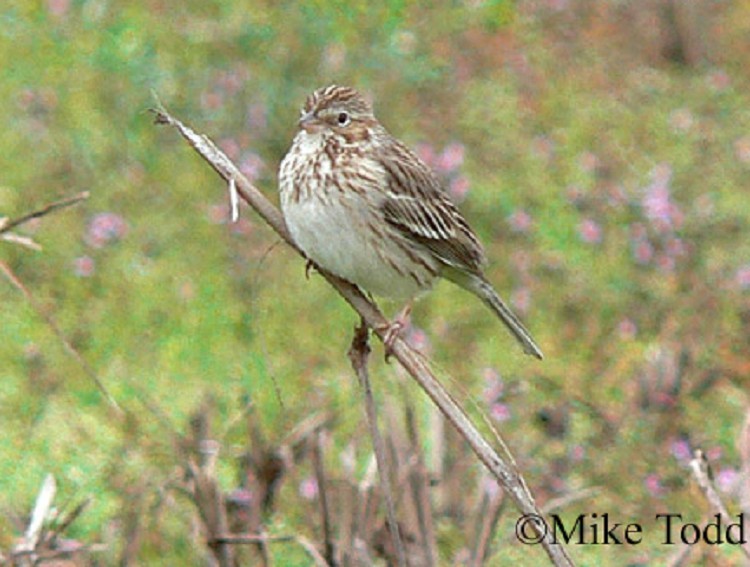 The name for this relatively large, drab sparrow, Vesper Sparrow,  comes from its melodious singing in the evening twilight, though it also sings vigorously in early morning. It breeds across the northern and western grasslands, and reaches its southeastern breeding limit in the mountains of Tennessee and North Carolina, where it is a rare and local; during the non-breeding season it retires to the southern and central United States and Mexico.

Clearing of land by European settlers likely led to the expansion of the Vesper's range into the East, but since the early 1900s when farmlands started to revert again to forest, this part of the population began a dramatic decline. In 1976, TWRA listed the Vesper Sparrow as a species In-Need-of-Management in Tennessee.

Description: This large, grayish-brown sparrow is streaked gray and brown above, and brown and soft-white below. It has a white eye-ring, and the outer tail feathers are white. Males and females look the same. The small patch of rust at the shoulder is not always visible.

Nesting and reproduction: Vesper Sparrows are monogamous and will often raise two broods in a season.

Incubation: The female incubates the eggs for 12 to 13 days.

Fledging: Both adults feed the young, which fledge in 9 to 13 days. The male continues to tend the fledglings, while the female starts the second nest.

Nest: A shallow cup of woven grasses, placed on the ground, concealed by adjacent vegetation.

Status in Tennessee: The Vesper's Sparrow is a locally uncommon summer resident in East Tennessee, and a regular but uncommon migrant and rare winter resident elsewhere in the state. It can be present in the state most anytime of the year, but is more likely to be found in early March to late May, and from early October to late November, with a few birds present throughout the winter. It is currently listed as In Need of Management in Tennessee.

Best place to see in Tennessee: During the breeding season, Shady Valley or the balds of Roan Mountain above 1,520 feet.