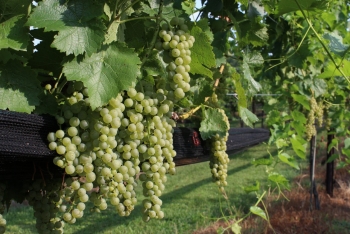 Tennessee has a long history with growing and harvesting grapes, also known as viticulture. A U.S. Department Agricultural report from 1880 citied 1,128 acres of grape production in Tennessee. After the Civil War, grape-growing was on track to become an important cash crop in the state, but the industry halted during prohibition.

Within the last quarter of the 20th century, however, Tennessee saw an increase in grape growing and winemaking. Commercial grape growing resumed in the mid-1970s with approximately 125 acres by 1978. A University of Tennessee report from 2015 shares that the wine and grape industry is growing nationally with Tennessee showing especially strong recent growth.

Tennessee had 905 acres of grapes in 2012 and had 67 wineries in 2015. The Tennessee wine industry provided direct employment for 464 workers, including self-employed owner operators, during that time. A large part of that recent growth comes from the assistance provided from Tennessee's Viticulture Advisory Board.

In 1985, the Viticulture Advisory Board was formed by Governor Lamar Alexander and the state legislature. The purpose of the VAB was to “asses the potential, establish the priorities, and determine the proper direction for the growth of the Tennessee grape industry."

The Viticulture Advisory Board no longer exists and is being replaced by a new board per Public Chapter No. 444.

Public notices of meetings are distributed to media and posted on the Tennessee Department of Agriculture’s newsroom.