These venomous snakes, also commonly known as “water moccasin,” cottonmouth snakes occur in the western third of Tennessee, including counties on the northern Highland Rim.   One subspecies, Western Cottonmouth (A. p. leucostoma), is recognized in the state.

Description: A large, heavy-bodied pit viper (30.0 to 42.0 inches in length) with keeled scales, vertical pupils, and a triangular head.   Western Cottonmouths are dark olive-brown to almost black with dark crossbands that may not be visible.   The top of the head is dark brown or black and a dark, wide band may be visible from the snout through the eye and onto the neck.

A white upper lip may be noticeable as well.   There is a large sensory pit on each side of the head between the nostril and eye.   Belly is tan or gray with dark blotches.   Males are longer and heavier than females. Young are lighter with distinct crossbands and a yellow-tipped tail.

Similar Species:  Southern and Northern Watersnakes are lighter in color, not as heavy-bodied, and lack facial pits.  Mississippi Green Watersnake does not have facial pits or vertical pupils.  Diamond-backed Watersnake is lighter with a chain-like pattern.  Copperhead lacks the dark, wide band on side of head.

Habitat: Occurs mainly in the swamps, sloughs, wetlands, and drainage ditches of western coastal plain; occasionally found around rivers and lakes.   They can be found swimming in the water, coiled on the bank, or in vegetation along the shore.

Breeding information: Mating occurs usually in spring, but can take place any time of year.   Males perform a dance in which they slither back and forth while waving their tails to attract females. Females give live birth to a litter of 2-15 (average 7) young during late summer.

Status in Tennessee: Cottonmouths are relatively common in aquatic habitats of western Tennessee.

Best places to see in Tennessee: Reelfoot Lake and the swamps in the area. 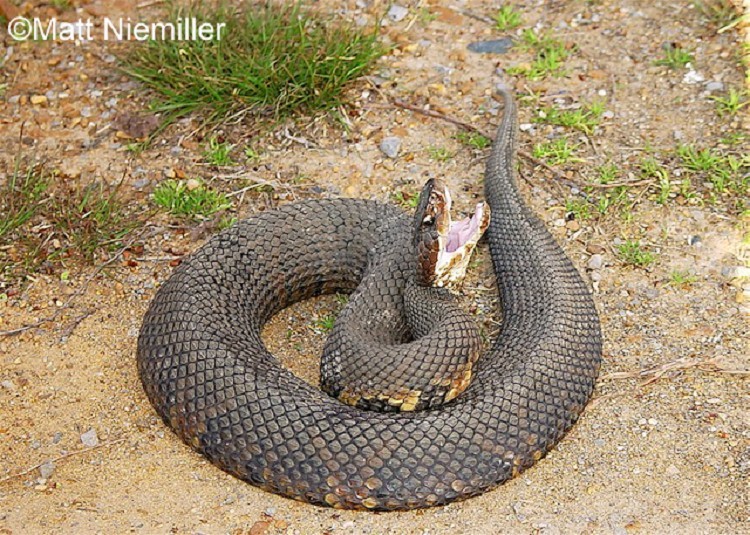