The Eastern Mole, which is the common mole found in yards, occurs state-wide.

Description:
A small, stout, streamlined mammal with concealed ears, tiny eyes, and a fleshy, movable snout.  The velvety fur is grayish-brown above and silvery-gray beneath.   The broad front feet are enlarged, have large claws, and point outward to aid in digging underground tunnels.   They have a short tail, which is scantily furred.

Habitat:
Occurs in a variety of habitats including forests, fields, pastures, gardens, lawns, and other areas with loose, well-drained soils.

Diet:
Earthworms and grubs are a principle food; also centipedes, beetles, ants, and other invertebrates.   Some plant foods are eaten as well.

Breeding information:
The Eastern Mole, like other moles, has a single litter annually.  Mating begins in late winter or early spring followed by a pregnancy of 4-6 weeks.  In the spring, a litter of 2-5 (average 4) young is born in the underground nest chamber, which is lined with roots, leaves, or grass.   Newborn moles are blind and nearly hairless. Young are weaned after a month of rapid growth.

Status in Tennessee:
No conservation concerns as this is a common species.

Fun Facts:
•In well drained, loose soil, Eastern Moles can tunnel up to 18 feet per hour.
•Occasionally albino moles may have their white fur colored bright orange or cinnamon yellow by the secretion of their scent glands, which is a rank, musky odor.

Best places to see in Tennessee: Well-drained yards and pastures. 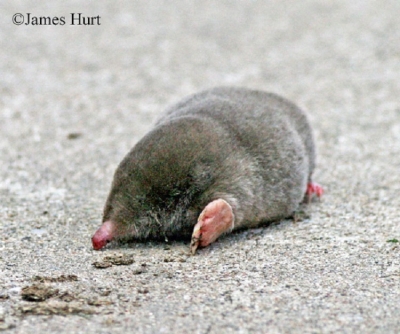