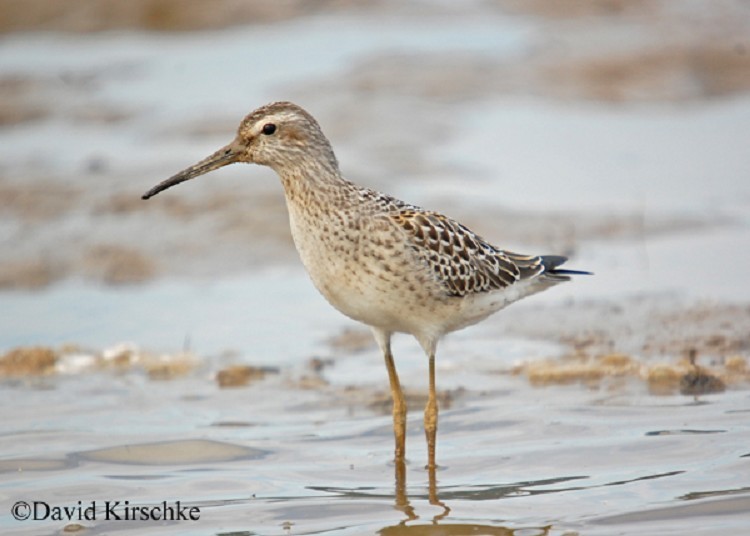 The Stilt Sandpiper is a more common migrant in the fall than in the spring in Tennessee, and in non-breeding plumage, it resembles a small Lesser Yellowlegs.   This species breeds in the Arctic of North America, and winters primarily in the interior of central South America.

The Stilt Sandpiper can be found statewide, but is more frequently encountered in Middle and West Tennessee from late April to late May, and then again from mid-July to mid-October.

Description: This medium-sized sandpiper has long, greenish legs, a long neck, and a long bill that droops slightly at the tip.   In flight the wings are plain, the rump is white, and the tail is gray.

Breeding plumage (April-August) is distinctive, with heavy barring below, dark blotches on the back, and a reddish cheek-patch.   Non-breeding plumage (September-April) is basically gray above and white below.

Immature birds (July-September) are similar to the non-breeding adult, but have a browner scaly back, and thin streaks on the chest.

Habitat: In Tennessee, Stilt Sandpipers use exposed mudflats, the edges of lakes and ponds.

Status in Tennessee: The Stilt Sandpiper is a rare spring migrant and uncommon fall migrant found across the state, but more frequent in Middle and West Tennessee. In spring it is most likely encountered from late April to late May, and then again from mid-July to through October.