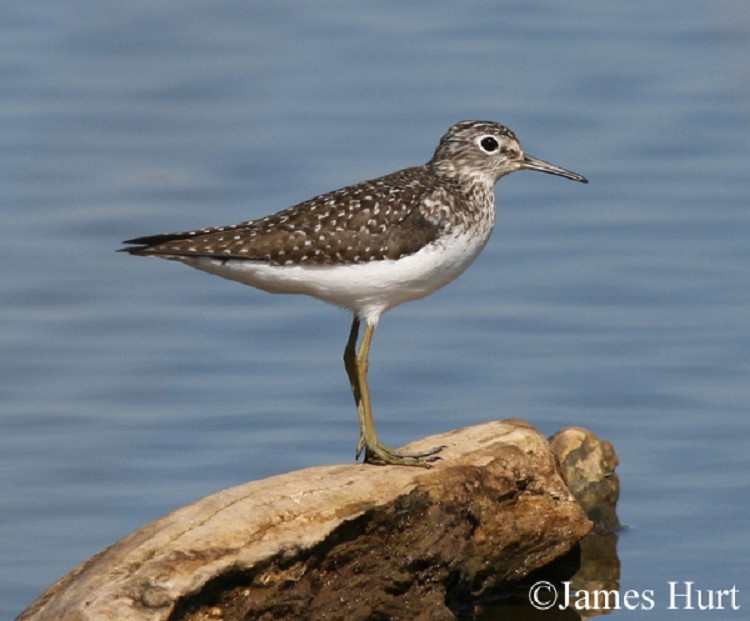 The Solitary Sandpiper is found in Tennessee during spring and fall migration, and as both the common and scientific names imply, it is usually found foraging along the banks of ponds and creeks alone.

It breeds in the northern boreal forest of Canada and Alaska (where it nests in trees using the nests of other birds!), and winters from Mexico to southern South America, but also on rare occasions in Tennessee.

The Solitary Sandpiper is most likely to be found in the state from mid-March to early June, and again from early July through November.

Description: This medium-sized shorebird has a moderately long bill, neck, and legs. It has a bold white eye-ring, a dark olive back with scattered small white spots, and a distinctly barred tail. The rump and central tail feathers are dark, and it frequently bobs its head.

Habitat: In migration and in winter, it is found along freshwater ponds, stream edges, temporary pools, flooded ditches and fields, more commonly in wooded regions, less frequently on mudflats and open marshes.

Nesting and reproduction: The Solitary Sandpiper has never been documented nesting in Tennessee.

Status in Tennessee: Uncommon migrant, but regularly found in suitable habitat during spring and fall migration.  In spring it may be found between mid-March and early June and in fall from early July through November.  Very rare in winter.

Best places to see in Tennessee: Many of the traditional shorebird locations are likely to turn up Solitary Sandpipers, including Ensley Bottoms, Rankin WMA, Tennessee NWR units, and various places around Reelfoot Lake.